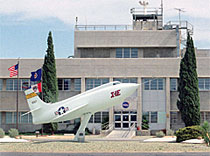 Visitors to NASA's Dryden Flight Research Center at Southern California's Edwards Air Force Base often recognize the entrance to Dryden's main building, not because they've been to Dryden before, but because they've seen it before on TV re-runs.

When NBC's "I Dream of Jeannie," one of the hit TV shows of the 1960's, aired between 1965-1970, viewers saw the front of this building, complete with the X-1E rocket plane on its pedestal out front.

This scene served as the NASA workplace entrance used by befuddled astronauts Tony Nelson, played by Larry Hagman, and Roger Healey, played by Bill Daily, supposedly at Cape Canaveral, Florida. The title character, played by Barbara Eden, was discovered in a genie bottle on a deserted island by astronaut Nelson following an off-course return from space.

The X-1E, retired in 1958, flew productive supersonic research missions for years. A time capsule containing Dryden memorabilia was placed in its cockpit in 1996, slated for opening in 2021.

From 1974-1978, viewers watching ABC's "The Six Million Dollar Man," cringed weekly as the program began with a horrendous crash sequence that resulted in "the world's first bionic man."

The crash footage was real, complements of NASA Dryden. It was actual footage of NASA Dryden research pilot Bruce Peterson's bad day on the dry lakebed on May 10, 1967, when the wingless M2-F2, one of the lifting body research vehicles that helped pave the way for space shuttle landings from space, went out of control.

Petersen survived, but was seriously injured in the crash. Actor Lee Majors, who played astronaut Steve Austin in the title role of the program, spent time at Dryden with the show's production crew filming the pilot episode.

The M2-F2 was rebuilt as the M2-F3 lifting body, modified as a result of the crash by the addition of a third vertical tail to improve control, flew many more research flights.

It now hangs in the Smithsonian Institute's Air and Space Museum in Washington DC.