B-57 Still Going Strong at 59
There are some things that continue to provide valuable service no matter what their age and the B-57 aircraft is one of them. 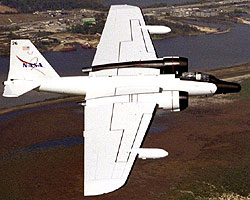 Developed by a British firm, the English Electric Company Ltd. in 1944 the B-57 made its first flight in May of 1949.

At left: The NASA 926 WB-57 aircraft on a research mission gathering data to understand Earth's environment

The United States Air Force chose the B-57 Canberra to reinforce its aging Douglas B-26 Invader fleet from a flight demonstration of several aircraft in 1951. The B-57 made a record breaking flight across the Atlantic Ocean, without refueling, in only four hours and forty minutes. It won hands-down over all the others for its time.

Although various models were built, the "F" model survived with several modifications. The aircraft was put into service with the 58th Weather Reconnaissance Squadron at Kirtland, AFB in Albuquerque, New Mexico in 1964 and was designated as a WB-57F ("w" standing for weather).

At right: Payloads up to 6,000 pounds can be carried in the aircraft's belly, aft fuselage, tail cone, wing pods, wing hatches and/or the nose cone

After several years in service the wings showed signs of stress, corrosion and cracks, and it was decided to replace the wings on only a few aircraft and retire the rest because it was financially prohibitive to repair the entire fleet. In the meantime NASA had contracted the Air Force to operate research missions that were part of the Earth Resources Technology Satellite program (ERTS). NASA chose the WB-57F for its High Altitude Research Program. The two WB-57's were then assigned the numbers NASA 926 and NASA 928

The NASA 926 and NASA 928 high altitude weather aircraft can fly day and night with a range of approximately 2500 miles. Two crewmembers in pressurized suits pilot the plane to altitudes in excess of 60,000 feet and the aircraft can carry a payload of about 6,000 pounds. 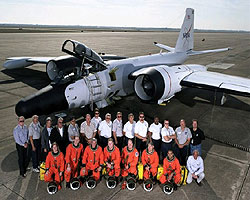 At left: Flight and ground crew pose in front of one of the two WB-57's still in service

Research such as Cirrus Regional Study of Tropical Anvils and Cirrus Layers - Florida Area Cirrus Experiment (CRYSTAL - FACE) and Clouds and Water Vapor in the Climate System (CWVCS) join a long list of atmospheric and weather related experiments aided by the use of the WB-57.