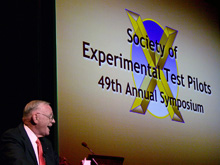 The first person to walk on the moon was also a first member of the Society of Experimental Test Pilots.

Image left: Neil Armstrong kept his audience attentive as he described the origins of the Society of Experimental Test Pilots at the society's symposium in Anaheim, Calif., on September 30. (Photo by Frederick A. Johnsen)

Neil Armstrong, one of 65 test pilots who came together in the 1950s to create the Society of Experimental Test Pilots (SETP), told a crowd of about 700 SETP members and friends that by the 1950s, test pilots realized the need to share experiences in ways more meaningful than just casual hangar flying at local bistros near Edwards Air Force Base. The base, in California's Mojave Desert north of Los Angeles, has been home to military, NASA, and commercial testing for decades.

Neil Armstrong delivered his remarks Sept. 30 at the 2005 SETP symposium in Anaheim, Calif., in a comfortable story-teller's way that held the audience's attention. It was a delightful excursion back in time with the man who flew research aircraft as diverse as a B-29, B-47, P-51, F-100, and the X-15 long before he stepped onto the moon and into history.

Armstrong said the initial group of fliers who wanted a test pilot organization included military pilots, air racers, and engineering pilots. "They were an eclectic lot," he added, saying they sometimes referred to themselves as "testy test pilots". Some aerospace companies initially frowned on the idea of a test pilots' association, Armstrong explained, because they thought it would be an attempt at collective bargaining. Armstrong and his fellow test pilots had a different idea - they envisioned a professional and technical association that would better their profession. To fund their upstart effort, every person at an early meeting was taxed a dollar, "resulting in a net cash on hand of 17 bucks," he recalled. From its beginnings with 65 charter members in the U.S., SETP has blossomed into an international organization tallying more than 2,000 members allied with the discipline of test flying.

Armstrong remembered the hopeful optimism that permeated SETP's first awards banquet in early October 1957, as the society's members looked forward to ample positive media coverage of their efforts. All the best-laid plans were eclipsed by the startling news that the Soviet Union had placed the world's first satellite in orbit, and SETP's big debut went mostly unnoticed. But the effects of the Soviet space shot would forever alter the course of test flying in the U.S. "No event since Pearl Harbor had such a profound effect on our country and our industry," Armstrong said. The rapid metamorphosis of the hallowed National Advisory Committee for Aeronautics into the shiny new NASA followed.

Soon test pilots like Neil Armstrong would fly the X-15 rocket plane during the 1960s in a scientific quest that yielded technologies for space travel. Neil Armstrong's host at the SETP symposium, NASA research pilot Bill Dana, was among several X-15 pilots accorded astronaut status for their high altitude missions in the special rocket plane. The Space Age was here, and the distinctions between air and space travel blended somewhere on the horizon.