Pointy End Up? With Aerospike Rockets, It's Down, Too!
Normally, rocketeers put the pointy end up when preparing to launch a rocket. But what if both ends are pointy?

NASA, the U.S. Air Force, and industry engineers recently launched two unique aerospike rockets, each using a pointed spike at the back end that is designed to improve rocket engine performance. 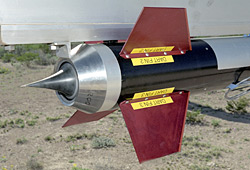 Image on right: The other pointy end. This closeup shows one of the Cesaroni Technology, Inc.-produced aerospike nozzles used in the Dryden Aerospike Rocket Test. NASA photo by Carla Thomas.

"The success of the Dryden Aerospike Rocket Test project furthers our ability to obtain flight research data for not only the aerospike nozzles but for other rocket technologies as well, such as dual-bell nozzles," said NASA Dryden's Trong Bui, the project's principal investigator. "This inexpensive, high-speed flight research platform allows us to take new ideas to flight quickly and at the same time, increases the technology readiness level of new aerospace concepts," Bui said.

Aerospike nozzles can be thought of as inside-out rocket nozzles. Rather than the rocket engine's exhaust plume exiting out the traditional bell-shaped nozzle, the plume travels externally. The main advantage of aerospike nozzles is that, as the rocket climbs, atmospheric and airstream pressure act on the plume to keep it at an optimum setting along the entire trajectory. This allows very efficient engine performance in flight. With traditional rocket engines, the bell nozzle is most efficient at only one point in the rocket's trajectory.

Although the advantages of the aerospike nozzles are well understood through analysis and ground test data, a shortage of actual published flight test data has precluded use of these nozzles in current as well as next generation space launch vehicles. In addition, the configuration of an aerospike nozzle presents unique challenges to the designer and fabricator. 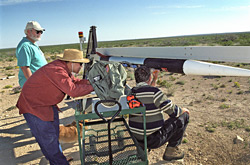 The rockets reached supersonic speeds in excess of Mach 1.5 and peak altitudes of more than 26,000 ft. However, speed and altitude weren't the project's aim. The goals of this flight research project were to obtain aerospike rocket nozzle performance data in flight and to investigate the effects of transonic flow and transient rocket flight conditions on aerospike nozzle performance.

"The successful planning and integration of the Dryden Aerospike Rocket Test project clearly demonstrates the capability of the low-cost technology approach used," said Scott Bartel of Blacksky Corp., of Carlsbad, Calif., which built the rockets. "The flight operations support from the Tripoli Rocketry Association and Fort Stockton shows that enthusiasm for aerospace research is universal," Bartel said. 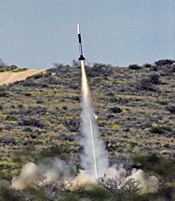 "For many years NASA Dryden has built small radio-controlled and remotely piloted research models flown at subsonic speeds to explore new concepts such as lifting bodies, parafoil landing systems, and the testing of hypersonic shapes for landing feasibility," said Chuck Rogers, AFFTC project investigator. "With the demonstration of this rocket flight test technique these models can now be tested at transonic and supersonic flight conditions at very low cost," Rogers said.

"We are very excited to have been part of the Dryden Aerospike Rocket Test, and hope that the data collected during the flights at the Pecos County Aerospace Development Center will further the development of the aerospike rocket motor," said George Riggs, president of the Pecos County/West Texas Aerospace Development Corp. "Pecos County looks forward to continued relations with NASA Dryden, Blacksky Corp. and Cesaroni Technology Inc. as the aerospike project moves forward," Riggs said.

NASA Dryden funded the project and instrumented the rockets. Dryden, together with the AFFTC, developed the project's flight test concept, worked the conceptual design of the aerospikes, and are analyzing the flight data. NASA Dryden and the AFFTC are co-located on Edwards AFB, Calif.

High resolution versions of the photos in this story are available at http://www.dfrc.nasa.gov/Gallery/Photo/Aerospike_Rocket/index.html