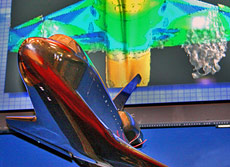 NASA highlighted its aeronautical research capabilities alongside models of the anticipated lunar and interplanetary crew exploration rocket at the American Institute of Aeronautics and Astronautics (AIAA) meeting in Reno, Nev., January 9-12, 2006. The mix of aero and astro in the names of NASA and AIAA underscored the relationship.

Image left: A gleaming metal wind tunnel model of the space shuttle caught reflections from an aircraft engineering simulation on a video screen at the NASA AIAA display in Reno, Nev., in January. (Photo by Frederick A. Johnsen)

Hull said one anticipated outcome of this interaction between NASA specialists and their industry counterparts will be a leveraging of talents and capabilities to push forward the state of the art. Teamwork with other government agencies, academia, and industry is key to the realization of NASA's goals. 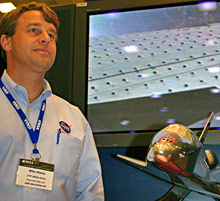 Special presentations to the AIAA audience on January 12 by NASA's Associate Administrator for Aeronautics, Lisa Porter, and Agency representatives provided an overview of NASA's role in aeronautics research. Porter characterized NASA aeronautics objectives as mastering the science of subsonic, supersonic, and hypersonic flight; protecting and maintaining key NASA aeronautics research and test facilities as national assets; focusing research efforts in areas that are appropriate to NASA's unique capabilities; and working directly as part of the multi-agency Joint Planning and Development Office (JPDO) to meet the needs of the next generation air transportation system.

NASA aeronautics activities will focus on fundamental aeronautics, airspace systems, aviation safety, and the aeronautics test program. Porter envisions strategic and integrated research conducted by NASA, instead of what she said some have called "the thousand-flowers-blooming construct." While her holistic approach might result in fewer research flowers blooming, Porter intends to create greater useful results in the four key NASA aeronautics areas. 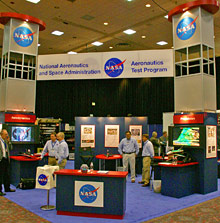 Rich Wlezien, in charge of fundamental aeronautics, told the AIAA audience of about 650: "We're going to have a very robust hypersonics program", a turnaround from what had been forecast at the end of the Agency's celebrated X-43A hypersonic test flights. Hypersonic flight is at least five times the speed of sound, and demands special design tenets that sometimes must integrate the airframe with the engine. The importance of integrating systems was a recurring theme in the NASA presentation.

Image left: NASA's display at the 2006 American Institute of Aeronautics and Astronautics meeting in Reno, Nev., in January touted the Agency's aeronautics capabilities as well as the central vision for space exploration. (Photo by Frederick A. Johnsen)

John White, leading the Agency's aviation safety efforts, described a unique problem facing the aviation industry: Mishap rates have remained at a fairly constant low level since the 1960s. Now, as NASA and other entities succeed in increasing the volume of traffic that can be handled in the national airspace system, the involved parties must also decrease that mishap rate, or risk adverse public reaction if the number of times people hear of aviation accidents increases even though the overall mishap rate remains constant. The desired outcome is more traffic at even lower mishap rates.

John Cavolowsky, leading NASA's Airspace Systems Program, said the Agency has already worked to match its efforts closely to the needs of the Joint Planning and Development Office in creating the next-generation airspace system. Ideas under consideration include tailoring the airspace to meet varying needs of different users, possibly reconfiguring airspace blocks at different times of day to meet changing traffic volumes.

Blair Gloss talked about NASA's Aeronautics Test Program (ATP), instituted to help underwrite the cost of maintaining and operating key wind tunnels and Agency research facilities to keep them operating, up-to-date, and competitive with foreign facilities for customers. Part of ATP also is geared to renew access to NASA research facilities by academia, he said.

AIAA audience members voiced support and appreciation for the direction NASA is moving with aeronautics.