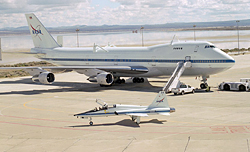 The aircraft will be used by NASA Dryden's research pilots for proficiency and mission support flights.

Dryden operated two T-38s for a number of years, replacing them with newer F-18s. Coming full-circle, the current cost of maintaining and operating the F-18s make the fuel-friendly, lower maintenance T-38 an attractive addition to Dryden's fleet. Formerly assigned to NASA's Langley Research Center in Hampton, Va. for a number of years, the aircraft had supported various aeronautics research projects there.

The newly arrived T-38 was flown by Dryden research pilot and former Shuttle astronaut Gordon Fullerton, who flew the aircraft from NASA's Johnson Space Center (JSC) in Houston, Texas, where it had been temporarily stored. 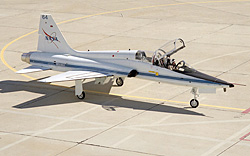 A small fleet of T-38s serve NASA primarily in pilot proficiency and training for astronauts, and have been used in this role at JSC since the mid-1960s. In the past, the aircraft supported the Space Shuttle program, their safety chase pilots keeping watch while escorting Shuttles gliding to landing. Additionally, the aircraft were used as platforms for photographic and video imaging for the Shuttle program.