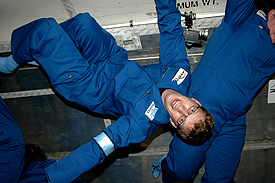 I'm flying in a Boeing 727 jet when I suddenly find myself floating through the airplane's cabin. End over end, I spin as the other passengers tumble and burst into laughter around me. Is something wrong? No, I could hardly be better -- I'm weightless!

Zero Gravity Corp. of Fort Lauderdale, Fla., has generously given me a seat on one of its "parabolic" flights that simulates the microgravity of space flight. The company, also known as ZERO-G, is the only one in the country licensed to offer weightless flights to the general public and was cofounded by former Space Shuttle astronaut Byron Lichtenberg. NASA provided ZERO-G with technical information on how to fly weightlessly and recently inked a deal to complete research flights with the company.

The gravity-defying flights use parabolas, special flight patterns in which the jet makes a steep climb and then smoothly "pushes over" into a shallower descent to create 25 seconds of weightlessness. One description I've read compares a parabolic flight to skydiving inside of a giant aluminum soda can.

My flight with ZERO-G is a special one: I'm flying with a group of Florida schoolteachers who've earned a scholarship to take the flight. Our plane is the company's flagship jet, "G-Force One," a specially modified Boeing 727 cargo plane. Sitting next to me onboard is Theresa Trawick, a Montessori teacher in Rockledge, Fla. I ask her what excites her most about experiencing weightlessness. "I want my students to see me doing it and realize that it's possible for them too," Trawick says. "It'll cause them to ask new questions and pursue their answers."

A member of ZERO-G's coaching team shouts "Five minutes!" That's our cue to leave the seats and move out into the tumbling area of the cabin. Trawick and other teachers with experiments rush to unpack their gear and get ready for the first parabola. 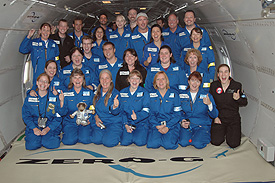 The parabola is designated "Martian-1" because it will simulate gravity on Mars, which is about two thirds less than Earth's gravity.

Image to left: A group photo with the Florida schoolteachers onboard ZERO-G's jet. Theresa Trawick is third from the left and giving a thumbs-up in the front row. Credit: Shane Tully/ZERO-G

Everyone lies down lengthwise along the cabin floor just before the plane begins its first steep climb to 32,000 feet. As I stare at a spot on the ceiling to keep from getting dizzy, my chest grows heavy while the jet tries to outrun gravity. I've felt the push of gravitational forces - or g-forces - squeeze and press my body on roller coasters, but what will reduced gravity be like?

Forty short seconds later, the pilot calls out, "Pushing over." We’ve crested the top of the climb and the plane begins its first 25-second dive to 24,000 feet.

Like someone magically flipped a switch, I feel instantly lighter. It's as though my body is now filled with helium. Another of ZERO-G's coaches exclaims, "Stand up! Stand up!" I jump to my feet, but it takes more than twice as long to land on them!

After half a minute of hopping around like giggling space bunnies, we're told, "Feet down, coming out," meaning the 727 is about to complete its initial descent and begin climbing again. The group quickly returns to the floor and prepares for the returning g-forces.

We complete two parabolas at even lighter lunar gravity. Just like Martian-1, everyone again jumps and bounces, but now our hang time is even longer.

"Next up, ZERO-1!" booms from the plane's loudspeaker. A rowdy cheer erupts inside our airborne jungle gym. Zero-1 is short for "zero-gravity 1" -- our first weightless parabola. In a few moments, we'll all learn just what it's like to float in space. This is it! 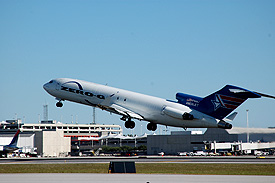 Just when I can't wait another second, the "push-over" announcement arrives and into the air I fly. With no effort, I'm on the jet's ceiling, smiling and laughing. I'm not the only one, either. Everywhere I look, mature teachers are flipping and tumbling like children. It's happy human chaos!

Image to right: G-Force One climbs from the runway in Fort Lauderdale, Fla. Credit: Shane Tully/ZERO-G

The feeling of microgravity is a lot like swimming in the deep end of a pool, only the water's much thinner and there isn't that persistent tendency to rise upward. Newtonian physics are obviously in control as I keep moving in a steady direction until I bump into something or, more likely, someone bumps into me in a fit of escalating giggles.

We go on to complete 16 zero-g parabolas, for a total of about eight minutes of weightlessness. Instead of feeling even slightly nauseous, I try a new stunt or style for the cameras and grow more daring each time. At one point, I find myself bobbing around upside-down just as the next "feet down" announcement comes and I have to hurry back into position (or risk falling on my head at twice the normal pull of gravity). Somewhere in the middle of all this, I see Trawick turning perfectly steady summersaults.

Back in our seats for landing, I ask Trawick what she's thinking now that she's experienced zero-g firsthand. "I just want to shout! I want to tell everyone about this," says Trawick.

Me too, Trawick. Me too.