Image to right: Gravity Probe B takes to the sky from Vandenberg Air Force Base, California. Credit: NASA

After a 24-hour delay, Gravity Probe B (GP-B) was launched Tuesday, April 20 at 12:57 p.m. EDT on board a Boeing Delta II rocket from Vandenberg Air Force Base, on the central coast of California.

GP-B is among the most thoroughly researched programs ever undertaken by NASA. GP-B will measure two parts of Einstein's general theory of relativity by assessing how the presence of Earth warps space and time, and how Earth's rotation drags space and time.

"The geodetic effect" describes how the presence of Earth changes space and time. Visually, it is similar to holding a bedsheet by four corners and placing a basketball in the center. The bedsheet will slightly wrap around the ball, somewhat similar to the way Earth warps space and time.

Image right: GP-B is among the most researched programs ever undertaken. Credit: NASA

GP-B will also measure the "frame dragging," the effect of Earth's rotation on space and time. Einstein predicted that very large objects in space distort time and space as they spin, like a tornado. Frame dragging has not been measured because the effect is so small that technology hasn't yet been able to record it.

The experiment uses three key components: a spinning sphere, a telescope and a star. Building GP-B required fundamental breakthroughs in a variety of technologies to ensure this experiment could be performed.

At the heart of the experiment are four gyroscopes, instruments for studying the Earth's rotation by means of a freely suspended flywheel. The gyroscopes for Gravity Probe B are not flywheels but electrically supported spheres, spinning in a vacuum. 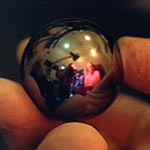 Image to right: Four near perfect spheres will help to show if the earth twists time and space. Credit: NASA

The center of the gyroscope is a jewel-like sphere of fused quartz. These spheres, the size of Ping-Pong balls, are the roundest objects ever made by man. The tiny spheres are enclosed inside a housing chamber to prevent disruption from sound waves, and chilled to almost absolute zero to prevent their molecular structure from creating a disturbance. The accuracy of these gyroscopes is 30 million times greater than any gyroscope ever built.

If Einstein's predictions were right, the gyroscopes should detect that small amounts of time and space are missing from each orbit. To measure each orbit, the gyroscopes are aligned with a guide star using a tracking telescope. A magnetic-field measuring device records the changes in respect to the guide star.

Using cutting-edge technology, the GP-B mission will provide researchers with a better understanding of the underlying structure of the universe and a clearer picture of how our physical world relates to the theory of gravity.

The GP-B experiment will have two months of preparation before calculating data for 16 months. The latest GP-B news and information is available online at http://einstein.stanford.edu.