Women Who Reach for the Stars
As the nation celebrates the contributions of women during National Women's History Month in March, NASA recognizes a number of females who made historic strides into the unknown.

Among these heroes is a group, often called the "Mercury 13," a team of 13 women who shared a dream - to be America's first women pioneers in space.

Dr. William Randolph Lovelace helped develop the tests for NASA's male astronauts and became curious to know how women would do taking the same tests. In 1960, Lovelace invited Geraldyn "Jerrie" Cobb to undergo the same rigorous challenges as the men. 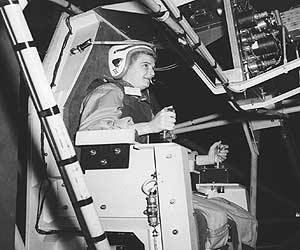 Cobb, already an accomplished pilot and on her way to being one of the world's best, became the first American woman to pass all three phases of testing. The results were announced at a conference in Stockholm, Sweden. Lovelace and Cobb recruited more women to take the tests, financed by the world-renowned aviatrix Jacqueline Cochran.

Women throughout the country responded after hearing about the opportunity through newspaper articles and friends. Most of the candidates were already accomplished pilots and recruited through the Ninety-Nines, a women pilot's organization.

This courageous group of women accepted the challenge to be tested for a position as part of the U.S. space team that became known as the First Lady Astronaut Trainees (FLAT).

Since doctors didn't know what stresses astronauts would experience in space, tests ranged from the typical X-ray and general body physicals to the atypical, in which the women had to swallow a rubber tube so their stomach acids could be tested.

Doctors tested the reflexes in the ulnar nerve of the women's forearms using electric shock. To induce vertigo, ice water was shot into their ears, freezing the inner ear so doctors could time how quickly they recovered.

The women were pushed to exhaustion using specially weighted stationary bicycles to test their respiration. They subjected themselves to many more invasive and uncomfortable tests to gain the opportunity to be part of America's space team.

Although the FLAT project was discontinued, many went on to extraordinary achievements in other endeavors. 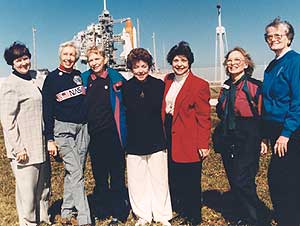 Women like these encourage females of all ages to go above and beyond their present circumstances and serve as role models to empower future leaders. They paved the way for female astronauts like Sally Ride, Eileen Collins and many others that now support the U.S. Space Program.
Image right: Visiting Kennedy Space Center in 1995 as invited guests of STS-63 Pilot Eileen Collins are (from left): Gene Nora Jessen, Wally Funk, Jerrie Cobb, Jerri Truhill, Sarah Ratley, Myrtle Cagle and Bernice Steadman members of the First Lady Astronaut Trainees. Image credit: NASA

The personal sacrifices and dedication of the "Mercury 13" continue to inspire women to reach for the stars, the Moon, Mars and beyond.