Demystifying Mars
Blood red and notoriously treacherous, the planet Mars is tantalizingly close to Earth yet infamously difficult to explore. Historically, only one in three missions to Mars has managed to reach the planet. For decades, the poor odds of successfully exploring Mars severely limited our ability to learn about our nearest planetary neighbor. Incredibly, in 1997 NASA began a remarkable reversal of exploration fortunes when the agency safely landed the first probe on Mars in 22 years. Not only did the touchdown snap the exploration losing streak, but it also signaled the start of a steady march of NASA spacecraft that would prove Mars to be much more than just the "red planet." 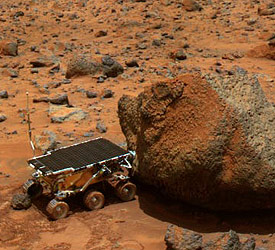 In 1994, when geologist Matt Golombek accepted the challenge of sending NASA's Pathfinder robotic explorer to Mars, he knew the trail to the planet had long grown cold. "No one had been back to Mars since the '70s," said Golombek, the project’s lead scientist. The last time was 1975, when Viking 1 and 2 visited the planet. Golombek could never have guessed the trail of triumph his spacecraft would blaze.

Image to right: Little Sojourner was the first robotic rover to explore the surface of Mars. Credit: NASA

Pathfinder was a mission to test a cost-conscious and compact lander with an ingenious system for cushioning its touchdown. "The lander was clad in an airbag, which was the first time this had been attempted by Americans," said Golombek. Prior to Pathfinder, Mars probes used complex and temperamental rocket thrusters to precisely control their landing. The new airbag system was far simpler and more forgiving, because it allowed a probe to gently bounce and roll like a beach ball until it came to a stop.

Tucked inside the airbag was a pyramid-shaped lander with hinged petals that opened and flattened out to reveal the enclosed Pathfinder science platform. Pathfinder was designed as an electronic base station equipped with cameras, scanners and communications equipment to relay its findings back to Earth. 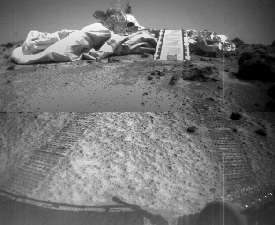 Alongside Pathfinder was the intrepid Sojourner "microrover." Weighing a scant 23 pounds, Sojourner arrived on Mars with a very special assignment. "Sojourner's job was to go out and learn stuff about the rocks," said Golombek. "The question was, where could you learn the most from this little 1-foot geologist?"

To select a landing site, Golombek could only rely on blurry, 20-year-old scouting images left over from the Viking era. Taking his best guess, he chose to land the spacecraft in a washed-out basin he believed would have interesting rocks and provide a wide area for the risky landing attempt. "We needed a big runway," said Golombek.

Golombek's gamble paid off with a safe landing and incredible attention back home on Earth. "In a sense, it was the first surface landing for a whole generation; Pathfinder had the front page of the New York and L.A. Times for a week," said Golombek.

The rocks Sojourner found offered plenty to be thrilled about, too. For one, the shape and types of rocks examined by the rover resembled those millions of miles away on Earth. But then came a discovery of something even more significant. "There were hints of a watery past," said Golombek. The tiny rover found little, round pebbles resembling a type of rock that forms in water called "conglomerate." Golombek and his colleagues began to wonder if the dry and lifeless Mars had once been more like our moist and fertile Earth. "This was the opening era of field geologists on Mars," concluded Golombek.