Getting Down and Dirty for Soil Moisture 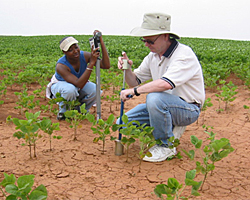 Why are scientists, college students and volunteers trooping into the countryside armed with sensors and notepads, rain or shine? They're "getting the dirt" and collecting detailed information about the soil.

Team members collect soil data in Ala. as part of the ongoing effort to study soil moisture.

High above the earth a water-sensing satellite orbits, while airplanes packed with research instruments circle 25,000 feet above three U.S. states and Brazil. The objectives are two-fold - validating solid moisture data from satellites and working to find the best instrument for conducting soil moisture by remote sensing.

By learning how to better gauge the amount of moisture in the soil, scientists are pursuing the long-range goal of eventually helping to improve the accuracy of weather forecasts and better estimate crop yields through remote-sensing methods.

"By gathering comprehensive soil moisture data from space, air and land, we hope to better understand how these measurements correlate and how the data can help farmers, weather forecasters and others who depend on Mother Nature for their livelihood," said Dr. Charles Laymon, a hydrologist with Universities Space Research Association at the Global Hydrology and Climate Center.

For example, an improved understanding of soil moisture could aid irrigation, allowing farmers to irrigate when and where necessary. This is important, Laymon said, because simple ground observations don't always tell the whole story. That's why scientists leading the campaign will look skyward for much of their data.

Aqua, a NASA satellite launched in May 2002, will provide some of the data. Orbiting 692 kilometers (430 miles) above Earth, its sensors collect information about Earth's water cycles - including water vapor in the atmosphere, clouds, precipitation, and snow and ice.

The campaign began by gathering data in Alabama and Georgia; Oklahoma and Brazil are next to be studied.

The research aircraft being used are NASA's P-3B turboprop and DC-8 jet. Equipped with remote sensing instruments, Airborne Synthetic Aperture Radar instrument (Airsar) will document patterns of surface moisture. Data would also be collected to better understand how water, energy and carbon are exchanged between Earth's land and atmosphere.

Dr. Eni Njoku, a JPL scientist, said Airsar data will be combined with ground data on soil and vegetation conditions to develop the problem-solving procedures for general global soil moisture maps and insight into how best to combine radar and radiometer data to get the most accurate soil moisture maps possible.

"Getting the dirt" now means not only using the hands-on method of samping but utilizing the most advanced technology for collecting information about soil moisture.