Smoke vs. Clouds
Three months after arriving at NASA's Goddard Space Flight Center to study clouds, Ilan Koren knew his first research project was under the weather. But his persistence eventually led to a discovery that challenged our understanding of how certain types of pollution affect Earth's climate. 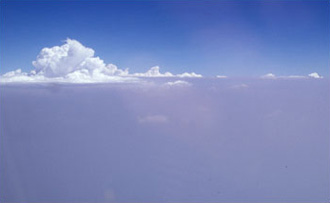 Koren came to Goddard in 2002 after receiving a doctorate from the University of Tel Aviv in Israel. He eagerly joined a team of NASA scientists studying the effects of tiny, airborne particles of pollution -- called "aerosols" -- on clouds.

Image to left: Smoke, interspersed with a few clouds, obscures the Brazilian landscape. NASA research is revealing new connections between smoke and the formation of clouds. Credit: USDA Forest Service

He'd begun a study of the effect of smoke aerosols on clouds over the Amazon, where widely scattered, low-level cumulus clouds form daily over the rainforest. During the dry season that runs from August through October, intense fires from burning vegetation across the region produce thick smoke plumes that travel wide distances. These conditions were perfect for studying how smoke affects clouds.

The Moderate Resolution Imaging Spectroradiometer (MODIS) instruments aboard NASA's Earth-orbiting Terra and Aqua satellites are ideal for studying clouds and aerosols. Every day, they observe almost the entire surface of the Earth across much of the color spectrum.

Koren pored over MODIS images of the Amazon rainforest, but couldn't find enough satellite images showing smoke and clouds in the same place at once. 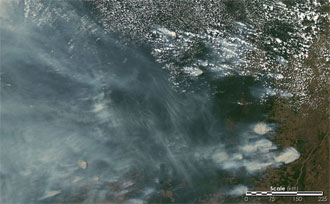 Image to right: A rare satellite image of smoke and clouds together in the Amazon rainforest. Click image for full size version.
Credit: NASA/Earth Observatory

At the time, most scientists believed that aerosols affect Earth's climate system in two ways, each producing a cooling effect. In the "direct effect," the tiny particles reflect incoming sunlight back into space, reducing the amount of sunlight reaching the surface. In the "indirect effect," the aerosols mingle with clouds, making them whiter, more reflective, and longer lasting.

Koren suspected the smoke was somehow suppressing the formation of clouds, but he would have to prove the absence of clouds wasn't due to meteorology or another cause. He searched scientific journals and found two studies in which both authors not only made the same observation, but proposed the same idea he was beginning to suspect: that there was a third effect aerosols could have on climate. One study termed this the "semi-direct effect," with results completely different from those of the direct and indirect effects.

His suspicions confirmed, Koren set out to learn exactly how the semi-direct effect of smoke aerosols impacts the Earth's energy budget. This is the balance of incoming energy from the Sun and outgoing energy that flows back out to space. "It is one thing to see with your eyes that smoke kills clouds. It's another thing to measure it," he said.

Where there was heavy smoke, the cumulus cloud cover went from an average of about 40 percent to zero, ruling out weather as a possible cause for the absence of clouds. 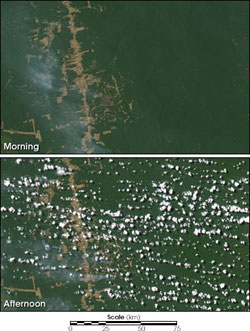 Using data from the Aqua satellite, the team estimated the amount of sunlight blocked by clouds or smoke. Their computer model predicted that both clouds and smoke would reflect enough solar energy to create a cooling effect, but that smoke's cooling power was weaker than cloud's. When smoke aerosols spread into areas that might normally be cloud-covered, and suppressed cloud formation, the net result would actually be a warming at the surface.

The semi-direct effect isn't limited to the Amazon basin. There have been similar cases over parts of Africa during the burning season, and over Canada during major boreal forest wildfires. Globally, this warming influence could explain why smoke and other absorbing aerosols don't have as much cooling influence as current models predict.

Although Koren's study wasn't the first to observe the semi-direct effect, it was the first to measure it. Entitled "Measurement of the Effect of Amazon Smoke on Inhibition of Cloud Formation," the study was featured in the Feb. 27, 2004 issue of Science magazine.