SCISAT to Aid in Understanding of Earth's Ozone Layer
What determines how Earth's ozone layer is distributed through our atmosphere? NASA is preparing to launch SCISAT, the first Canadian scientific satellite since 1971, to find out. Carrying the Atmospheric Chemistry Experiment (ACE), SCISAT is scheduled to launch from Vandenberg Air Force Base in California aboard a Pegasus XL launch vehicle August 12. 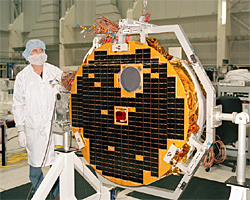 Scientists aim to use the ACE mission to measure the chemical processes that affect our protective ozone layer, contributing to our understanding of ozone depletion. The ACE mission consists of a Fourier Transform Spectrometer (ACE-FTS) instrument and the Measurements of Aerosol Extinction in the Stratosphere and Troposphere Retrieved by Occultation (MAESTRO) instrument. Both instruments are designed to gather information on the chemical processes occurring in the ozone layer.

Data collected from the ACE mission will be used together with data gathered in future missions planned by NASA, the European Space Agency, and other international partners to gain further insight into the chemistry and dynamics that affect the Earth's ozone layer. Findings from the ACE mission, which is expected to last two years, will help Canadian scientists and policy makers devise new environmental policies to help improve and maintain the health of our only atmosphere.

Weighing in at about 330 pounds, SCISAT will operate from a 400-mile-high polar orbit. The spacecraft arrived at Vandenberg Air Force Base from the Canadian Space Agency's David Florida Laboratories on June 25.

Launch coverage will be available from: http://www.ksc.nasa.gov/elvnew/scisat/index.htm
NASA's John F. Kennedy Space Center
› Back To Top