The Tumbleweed Rover is on a Roll 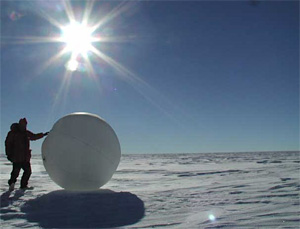 It must have been a strange sight: a solitary white ball, six feet in diameter, rolling across the icy terrain of the South Pole.

During its recent journey across Antarctica, the wind-driven "tumbleweed rover" built by NASA's Jet Propulsion Laboratory demonstrated that it can harvest data even in extreme and remote settings.

"We are testing a new mode of rover transportation that uses the available environmental resources to give us an added edge to cover more ground, using fewer on-board resources," said Dr. Alberto Behar, a robotics researcher at JPL in Pasadena, Calif. That means scientists could get a lot of cost-effective science out of a tumbleweed rover.

The inflatable rover was deployed from the National Science Foundation's Amundsen-Scott South Pole Station in Antarctica on Jan. 24. During its seven-day trek, it averaged about 3.7 miles per hour, occasionally surpassing a whopping 13 miles per hour. Thanks to running electronics and an internal air pump, the rover's internal instrument payload stayed at about 86 degrees Fahrenheit, relatively toasty compared to the subfreezing temperatures outside.

An instrument payload in its center was held in place by a tube attached at each end to the surface. During its 80-mile journey, the rover used the global Iridium satellite network to send information on its position, the surrounding air temperature, pressure, humidity and light intensity to a ground station at JPL.

The concept of a beach-ball-shaped rover dates back to the 1970s. JPL has tested scale models of the tumbleweed rover in the Mojave Desert in California and Point Barrow, Alaska. 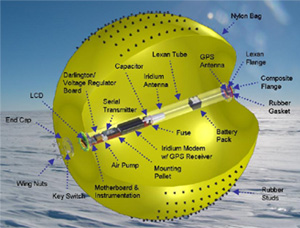 Image to right: the tumbleweed rover is a large, wind-blown, inflated ball, which carries an instrument payload in its interior. Click image for full size version. Credit: NASA

Polar missions are perfect for this type of rover. Its instrument packages can look for water beneath ice or desert, a task that can't be done accurately from orbit. In 2003, a similar rover was deployed in Greenland for a long-distance test. Armed with an instrument payload and satellite communications, the rover traveled more than 80 miles in less than two days and sent data to a ground station at JPL every half hour.

JPL is already planning the next generation of the rover. Scientists envision a lightweight device, weighing in at about 88 pounds, that can serve as its own parachute, airbag and unmanned exploration vehicle.

Behar hopes an updated version of the tumbleweed rover will be deployed again later this year. If its success continues, the solitary ball may one day find itself rolling across the surface of the red planet, driven by martian winds.

For more information on the tumbleweed rover's trek across Antarctica, visit:
http://www.jpl.nasa.gov/releases/2004/78.cfm