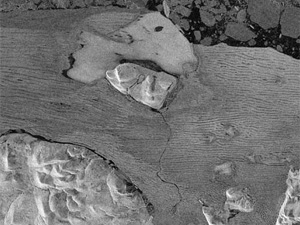 In the summer of 2002, graduate student Derek Mueller made an alarming discovery: the biggest ice shelf in the Arctic was breaking apart.

This Canadian RADARSAT image, acquired in August 2002, shows the central crack in the Ward Hunt Ice Shelf running down the center of the image. (Image courtesy of the Alaska Satellite Facility, Geophysical Institute, University of Alaska Fairbanks)

The bad news didn't stop there. Lying along the northern coast of Ellesmere Island in northern Canada, the Ward Hunt Ice Shelf had dammed an epishelf lake, a body of freshwater that floats on denser ocean water. Located in Disraeli Fiord, this was the largest and best-understood epishelf lake in the Northern Hemisphere and home to a rare ecosystem. When the ice shelf fractured, it drained the epishelf lake.

The decline of the 3,000-year-old ice shelf may have a lasting impact on humans and wildlife. Massive ice islands broken off from the fractured ice shelf could jeopardize shipping and offshore development, such as oil rigs, and loss of the microbial ecosystems in sea ice would drastically affect the food chain in the Arctic Ocean.

Mueller and his graduate advisor Warwick Vincent, both of Laval University in Quebec City, contacted geophysics professor Martin Jeffries at the University of Alaska Fairbanks.

Jeffries requested data from the agency's RADARSAT-1 satellite. Equipped with a Synthetic Aperture Radar (SAR) sensor, RADARSAT-1 can acquire imagery in almost any kind of weather, with or without sunlight.

RADARSAT data indicated that the ice shelf began to crack as early as April 2000, following a century-long decline in size. In their final flight over the ice shelf on August 11, 2002, Mueller and his party learned that new icebergs had broken off within the past five days. By September 2002, the ice shelf had split several times. 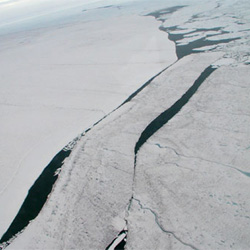 An ice island about 1.5 kilometers long, 250 meters wide, and 30 meters thick moves into the Arctic ocean after the fracturing of the Ward Hunt Ice Shelf in August 2002. (Image courtesy of Warwick Vincent, Université Laval)

The Ward Hunt Ice Shelf breakup comes at the same time as news of unprecedented melting of sea ice in the Northern Hemisphere. "Sea ice cover has been shrinking about 3 percent per decade over the past few decades. We saw a record minimum in September 2002, and the summer of 2003 almost set a new record," said Mark Serreze, a research scientist at the National Snow and Ice Data Center in Boulder, Colo.

Loss of sea ice can have major implications for global climate. Sea ice reflects most of the Sun's energy back into space. As sea ice continues to melt, more radiation will be absorbed by the ocean, potentially contributing to global warming.

Biodiversity loss is as much of a concern as potential climate change. Both the ice shelf and the epishelf lake it dammed hosted uncommon micro-environments full of bacteria and microscopic plants and animals. Directly or indirectly, zooplankton, fish, whales, seals and polar bears depend on the energy provided by those microbial ecosystems, Jeffries explained. "As we're losing sections of the ice, we're losing portions of these communities," Vincent said.

"I think this ice shelf breakup is another example of how valuable remote sensing is, and how important it is that scientists have easy access to these data on a frequent basis," said Jeffries. "Otherwise, we miss things we really need to know."

"The Ward Hunt Ice Shelf is a fairly small feature, and in terms of global climate impact, the breakup of this ice shelf is trivial," said Serreze. "Yet it's another indication of what's happening in the Arctic."

Read the full text of this article at:
http://earthobservatory.nasa.gov/Study/wardhunt/