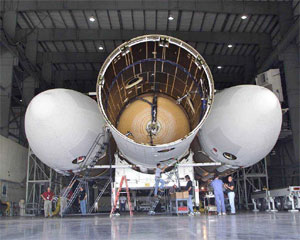 The forward end of the Delta IV Heavy's Common Booster Core is seen prior to mating.

Although the 235 foot tall vehicle is set to launch in July 2004 with an Air Force instrumented satellite as a demonstration payload, NASA is a close observer. A Delta IV Medium class, which shares common elements with the Delta IV Heavy, is scheduled to launch NASA's GOES-N Earth-observing satellite on Dec. 1, 2004.

The Delta IV Heavy is also expected to be a contender to launch NASA's Orbital Space Plane vehicle currently under development.

"The significance of this mission is that it will be our first opportunity for a bird's-eye view of the Delta IV launch site processing activities, enabling the Launch Services Program to gain valuable experience which can be directly applied toward the upcoming GOES mission," said Tammy Herrington, NASA mission integration manager.

There are five configurations of Delta IV launch vehicles, all of which are based on the Boeing Common Booster Core (CBC) first stage. The second stage is mated to the CBC using a computerized laser alignment system that was specially developed for this process.

The Delta IV Heavy can deliver nearly 30,000 pounds of payload into geonsynchronous transfer orbit, comparable to the Lockheed Martin Titan IV/Centaur. Like the Space Shuttle, it can lift more than 50,000 pounds of cargo to low Earth orbit. The most powerful evolved expendable launch vehicle ever built other than the Saturn V, it could be called upon to someday launch manned missions.

As the Delta IV Heavy's first launch date draws near, NASA hopes to gain insight into the processing and launch of this groundbreaking new vehicle that could boost the agency into the future.