The Good, the Bad and the Ozone
Ozone is a big buzz word these days. We mostly hear about the ozone layer, and the importance of protecting it. But if you want to understand what ozone's all about, you need to understand that it can be good, and it can be bad.

+ The good kind of ozone

The stratosphere is the layer of the atmosphere from 10 to 30 miles above sea level. When there's ozone in this layer, it protects us from solar radiation. How? Simple chemistry. 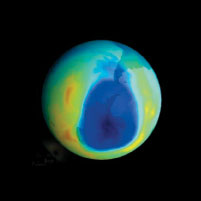 Regular oxygen molecules, known to science-types as O2, are made up of two oxygen atoms stuck together. Solar energy shoots in from space and splits that molecule into two atoms. When one of those stray atoms attaches to a full-fledged O2 molecule, you've got, well, O3, otherwise known as ozone. All that action blocks solar radiation, and keeps it from reaching us.

Image above: The second largest ozone hole ever observed is seen above Antarctica in this image from September 2003. Credit: NASA

How can solar radiation be harmful to life on Earth? Part of that radiation is ultra-violet, or UV radiation. It's an intense energy from the Sun that can cause a whole lot of damage. Skin cancer is the most dramatic result of a too much UV radiation, but there's a lot more too. Photosynthesis in plants is also affected, and that causes problems for the whole food chain. See where this is headed? We need to protect our ozone shield, and we can do so by decreasing the pollution that our industrial society puts out in large amounts every day.

+ The bad kind of ozone

Let's come down a little closer to Earth. The troposphere is everything below the stratosphere, from sea level to about 10 miles above. It's where everything lives. Things that happen to the troposphere happen to us; there's nothing indirect about it. 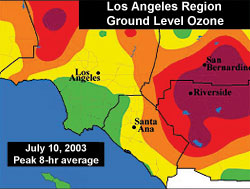 Image above: Parts of the Los Angeles area are considered to contain unhealthy amounts of ground level ozone. Red areas on the map indicate more than 100 parts per billion by volume of the molecule. Credit: EPA

In humans, it means lung damage. Small children and people with asthma are especially at risk. How can you help solve the problem?

Cars, trucks and SUVs are the biggest contributor to this ozone buildup. Engine exhaust creates nitrogen dioxide, so the more you drive, the more your vehicle creates. High gas prices aren't the only reason to leave the car in the garage.

NASA's Aura is going to keep tabs on both types of ozone. It's a spacecraft that will provide us the first comprehensive global view of the Earth's atmosphere, an essential stepping stone to better understanding the Moon, Mars and beyond. The launch of Aura is a challenging endeavor, a mission on the cutting edge of scientific discovery characteristic of the Agency's legacy of ground-breaking exploration.

One of its most impressive tools is the Ozone Monitoring Instrument, or OMI. The device will measure the amount of energy going into and coming out of the Earth, in a technique known as the "backscatter" method. The results of these observations will tell scientists how much ozone is over a particular area, and how much the area is gaining or losing over time.

Aura is a complex mission for a complex problem; but simply put, it's critical to understanding and protecting the air we breathe.
Matthew Cavagnaro
NASA's John F. Kennedy Space Center
› Back To Top