SIRTF Gets a New Name
NASA's Space Infrared Telescope Facility (SIRTF) will now be known as the Spitzer Space Telescope, named after the late Dr. Lyman Spitzer Jr. The honor has been bestowed on Dr. Spitzer to commemorate his vision and contribution to science. 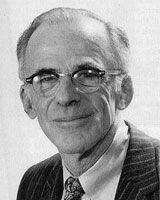 Dr. Lyman Spitzer, Jr. (1914-1997), Charles A. Young Professor of Astronomy at Princeton University, was a widely known authority in the field of theoretical astrophysics.

A NASA-sponsored contest to rename SIRTF received more than 7,000 essay entries from all over the world. The winning entry came from a resident of British Columbia.

In 1946, many years before the first satellite had been launched, Dr. Spitzer developed the concept of a telescope in space. He contended that images from a space-based observatory would not be distorted by Earth's atmosphere.

Dr. Spitzer was determined to see a space telescope developed and vigorously lobbied NASA and Congress for funding. In 1975, NASA, along with the European Space Agency, began development of what would become the Hubble Space Telescope. In 1977, due to Spitzer's continuous efforts, Congress approved funding for the construction of the Space Telescope.

Fifty-four years after Spitzer first proposed placing a large telescope into space, the Hubble Space Telescope was delivered by the Space Shuttle in 1990. Hubble still orbits the Earth today, providing us incredible images of the Universe and amazing new discoveries.

Spitzer won numerous awards, not only for his outstanding astronomical observations, but for his work that advanced knowledge in the field of stellar dynamics, plasma physics, and thermonuclear fusion. His legendary foresight and fortitude is known world-wide. 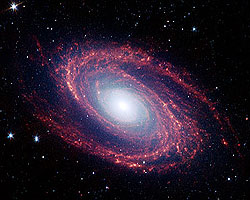 The spiral galaxy, Messier 81, is illuminated in a Spitzer image. Red regions in the spiral arms represent infrared emissions from the dustier parts of the galaxy where new stars are forming. The image shows the power of Spitzer to explore regions invisible in optical light, and to study star formation on a galactic scale.

His namesake, the Spitzer telescope, was launched Aug. 25, 2003, from Cape Canaveral Air Force Station, Fla. Spitzer is the largest infrared telescope ever launched into space. Its sensitive telescope can detect infrared energy, or heat, through dense clouds of gas and dust and smaller stars too dim to be seen by an Earth-bound telescope, from millions of miles away.

The initial images that have recently been transmitted from the Spitzer Space Telescope are spectacular. "NASA's newest Great Observatory is open for business, and it is beginning to take its place at the forefront of science," said NASA Associate Administrator for Space Science Dr. Ed Weiler. "Like Hubble, Compton and Chandra, the new Spitzer Space Telescope will soon be making major discoveries, and, as these first images show, should excite the public with views of the cosmos like we've never had before," he said. 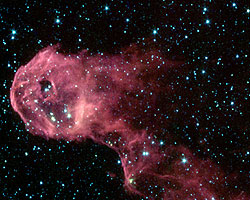 The Elephant's Trunk Nebula is an elongated dark globule within the emission nebula IC 1396 in the constellation of Cepheus. Located at a distance of 2,450 light-years, the globule is a condensation of dense gas that is barely surviving the strong ionizing radiation from a nearby massive star. The globule is being compressed by the surrounding ionized gas.