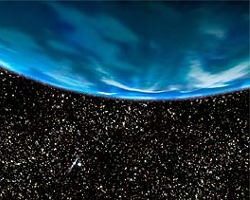 Almost 13 billion years ago, when the universe was in its infancy and our own solar system did not yet exist, a planet formed around a sun-like star. NASA's Hubble Space Telescope has precisely measured the planet's mass and has confirmed that it is the oldest known planet to date.

In this artist's concept, a rich starry sky fills the view from an ancient gas-giant planet in the core of the globular star cluster M4.

The ancient planet has had a remarkable history, because it has wound up in an unlikely, rough neighborhood. It orbits a peculiar pair of burned-out stars in the crowded core of M4, a globular star cluster 5,600 light-years away in the summer constellation Scorpius.

Because globular clusters are deficient in heavier elements, some astronomers have long believed that globular clusters cannot contain planets. But with this new Hubble discovery, it appears they were simply looking in the wrong place.

"Our Hubble measurement offers tantalizing evidence that planet formation processes are quite robust and efficient at making use of a small amount of heavier elements. This implies that planet formation happened very early in the universe," said Steinn Sigurdsson of Pennsylvania State University, State College.

Hubble revealed that the planet is in an unlikely place. It orbits two captured stars: a helium white dwarf and a rapidly spinning neutron star near the core of M4. In such a forbidding locale, fragile planetary systems are typically ripped apart due to gravitational interactions with neighboring stars.

The new Hubble findings close a decade of speculation and debate as to the true nature of this ancient world, which takes a century to complete a single orbit. With a mass only 2.5 times that of Jupiter, the planet is likely a gas giant without a solid surface like the Earth.