Magnetars, the Most Magnetic Stars In the Universe
Ultra-powerful magnetic neutron stars play hide-and-seek with astronomers. They're known to erupt without warning, some for hours and others for months, before dimming and disappearing again. 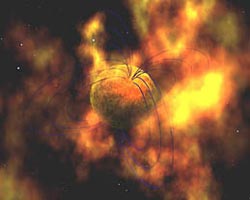 At left is an artist's rendering of an erupting neutron star. It can generate the most intense magnetic field observed in the Universe. The field strength of a magnetar is one thousand trillion times stronger than Earth's and is so intense that it heats the surface to 18 million degrees Fahrenheit.

"We only know of about 10 magnetars in the Milky Way galaxy." remarked Dr. Peter Woods of the Universities Space Research Association. "If the antics of the magnetar we are studying now are typical, then there very well could be hundreds more out there." NASA research has suggested there may be far more magnetars than previously thought.

Observing the explosions from these celestial bodies has been tricky. The answer lies in the timing. So how do the researchers observe what has never been seen? Leave it to NASA to develop the perfect piece of equipment to handle the job.

The Rossi X-ray Timing Explorer (RXTE), launched in December 1995 from Kennedy Space Center, Fla., was designed to observe fast-moving neutron stars, X-ray pulsars and bursts of X-rays that brighten the sky and disappear.

Some pulsars spin over a thousand times a second. A neutron star generates a gravitational pull so powerful that a marshmallow impacting the star's surface would hit with the force of a thousand hydrogen bombs.

Magnetars, the most magnetic stars known, aren't powered by a conventional mechanism such as nuclear fusion or rotation, according to Dr. Vicky Kaspi. "Magnetars represent a new way for a star to shine, which makes this a fascinating field," said Kaspi.

Although not totally understood yet, magnetars have magnetic fields a thousand times stronger than ordinary neutron stars that measure a million billion Gauss, or about a hundred-trillion refrigerator magnets. For comparison, the Sun's magnetic field is only about 5 Gauss.

In the constellation Cassiopeia, approximately 18,000 light years from Earth, a magnetar named 1E 2259 is being studied. It suddenly began bursting in June 2002, with over 80 bursts recorded within a 4-hour window. Since then, Magnetar 1E 2259 hasn't disturbed the depths of space. 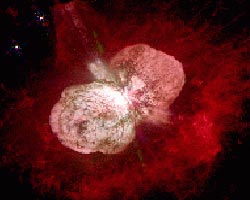 Using RXTE, astronomers can study how gravity works near black holes and observe changes in X-ray brightness that last for a thousandth of a second, or for several years. They also can monitor explosive wavelengths not able to be seen in visible light.

Eta Carinae is an extremely massive star in our galaxy, and an extremely unstable one. Since 1996, a science team has been monitoring the X-ray flux from this region using RXTE. As RXTE continues to provide the first detailed monitoring of the X-ray emissions of Eta Car, coordinated observations are helping answer many scientists' questions. HST Image Credit: Jon Morse

Astronomers will be able to study this violent and bizarre space phenomenon in greater dimension when NASA's Swift Gamma-Ray Burst Explorer is launched in mid-2004. Swift will be about 20 times more sensitive to magnetar bursts than any other satellite.