Supernova Better the Second Time Around 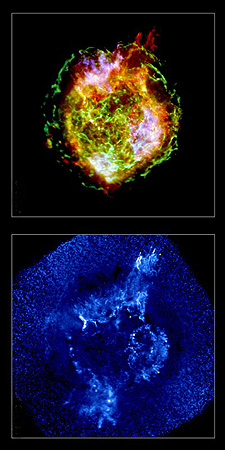 As though seeing the former star for the first time, NASA's Chandra X-ray Observatory has captured new and incredibly detailed images of supernova remnant Cassiopeia A.

The new images of Cassiopeia A provide 200 times more detail than the "first light" pictures originally taken by Chandra over five years ago.

"It's a gold mine of data that astronomers will be panning through for years to come" said Dr. Martin Laming of the Naval Research Laboratory in Washington, D.C.

Image to right: The upper portion of this photos shows supernova remnant Cassiopeia A and is the most detailed image ever made of the remains of an exploded star. The lower image has been specially processed to highlight jets of silicon atoms shooting out from the supernova.
Credit: NASA/CXC/GSFC/U.Hwang et al.

While Cassiopeia A was once a thriving star, today it is what astronomers classify as a supernova remnant. Stars become supernova remnants when an explosion casts off a majority of its gaseous mass, leaving only a dense neutron star behind.

The new images from Chandra suggest that the process of "going supernova" could be more complicated than astronomers have previously believed. The one-millisecond exposure of Cassiopeia A shows two opposing jets of silicon atoms shooting out from the vicinity of the neutron star.

"The presence of the bipolar jets suggests that jets could be more common in relatively normal supernova explosions than astronomers have supposed," said Dr. Una Hwang of NASA's Goddard Space Flight Center in Greenbelt, Md.

Chandra researchers believe the silicon jets originated soon after the gaseous explosion of the star. The images also show that a faint neutron star was produced during Cassiopeia A's violent demise and may have helped accelerate the jets' formation.

Chandra was launched aboard Space Shuttle Columbia on July 23, 1999. Less than a month later, the revolutionary space telescope was up and running, taking the original images of Cassiopeia A on August 19.

Since its mission began, the Chandra X-ray Observatory has used its unique technology to reveal aspects of the universe once hidden to astronomers. Five years later, Chandra continues to unveil stunning cosmic discoveries that will challenge and inspire researchers for years to come.
Charlie Plain, KSC Staff Writer
Chandra X-ray Center and NASA's John F. Kennedy Space Center
› Back To Top