No Ordinary Battery
Mars exploration rovers Spirit and Opportunity will be using newly developed batteries to power their research when they touch down on the Red Planet early in 2004. This mission is instrumental for gathering data on the planet's water activity history taken from rocks and soil.

The Wright-Patterson Air Force Base Research Laboratory (AFRL) developed a new type of lightweight, lithium-ion battery to increase the wattage output and allow the rovers to operate day and night. 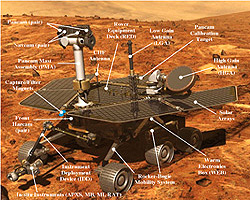 It is crucial to have this technology available because the new rovers need almost 100 watts of power to operate (equivalent to a standard light bulb), compared with the 1997 Pathfinder mission which used only around 16 watts.

What makes these powerful batteries different is the way they will be stored and recharged. The batteries come with their own warming box where they'll be stowed, overcoming the extreme temperatures of space. During the day while the solar arrays power the rovers, they will also be charging the batteries and keeping them warm.

The advantage is apparant at night, when the rovers will use the battery's stored-up power for their missions. Spirit and Opportunity will be able to conduct more experiments, trek up to 40 meters per day, and continue research after sundown.

The true test will come in January 2004 as the battery's capabilities are tested, according to Steve Vukson, chemical engineer with NASA. As Spirit and Opportunity fly toward Mars, the hard work and hopes of the Air Force Research Laboratory eagerly goes with them.