In Colliding Galaxies: Planetary Ore
Galaxies smashing together could be good news for planets. 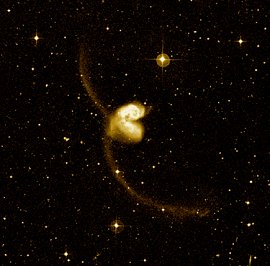 NASA's Chandra X-ray Observatory has discovered rich deposits of neon, magnesium, and silicon in a pair of colliding galaxies known as The Antennae. The deposits are located in vast clouds of hot gas. When the clouds cool, say scientists, a great number of stars and planets should form. These results may foreshadow the fate of our own Milky Way and its future collision with the Andromeda Galaxy.

"The enrichment of heavy elements in The Antennae is phenomenal," says Giuseppina Fabbiano of the Harvard-Smithsonian Center for Astrophysics (CfA) in Cambridge, Massachusetts, who leads the team that did the research. "This must be due to a very high rate of supernova explosions in these colliding galaxies."

When galaxies collide, direct hits between stars are extremely rare, but collisions between huge gas clouds in the galaxies trigger a stellar baby boom. Massive newborn stars race through their evolution in a few million years and explode as supernovas. Heavy elements manufactured in these stars are blown away by the explosions and enrich the surrounding gas for thousands of light years.

The supernova rate in The Antennae is about 30 times that of the Milky Way. Supernova explosions heat the gas in these galaxies to millions of degrees Celsius--so hot that they emit X-rays. Such clouds are mostly invisible to optical telescopes, but they are easy targets for the Chandra X-ray Observatory. Chandra data reveal regions of high and varying enrichment. In one cloud, for instance, magnesium and silicon are 16 and 24 times as abundant as in the Sun.

"These are the kinds of elements that form the ultimate building blocks for [rocky] habitable planets," says Andrew King of the University of Leicester, U.K. and a coauthor of the study. "This process occurs in all galaxies, but it is greatly enhanced by the collision." 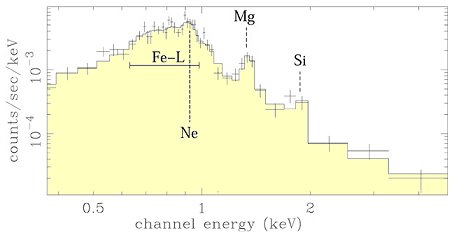 Above: An X-ray spectrum of a region in The Antennae galaxies. It shows the physical signatures of elements of iron (Fe), magnesium (Mg), and silicon (Si). These data are from one of Chandra's onboard grating X-ray spectrometers. [Larger Image]

As the enriched gas cools, a new generation of stars will form, and with them new planets. A number of studies indicate that clouds enriched in heavy elements are more likely to form stars with planetary systems, so in the future an unusually high number of planets may form in The Antennae.

"If life arises on a significant fraction of these planets, then in the future The Antennae will be teeming with life," speculated Francois Schweizer, another coauthor who is from the Carnegie Observatories in Pasadena, Calif. "A vast number of Sun like stars and planetary systems will age in unison for billions of years." 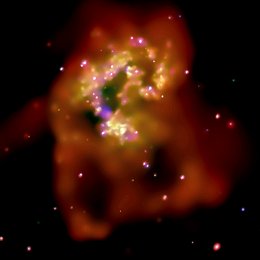 At a distance of about 60 million light years, The Antennae system is the nearest example of a collision between two large galaxies. The collision, which began a couple of hundred million years ago, has been so violent that gas and stars from the galaxies have been ejected into the two long arcs that give the system its name.

The Chandra image shows spectacular loops of three million-degree gas spreading out south of The Antennae. "These loops may be carrying out some of the elements dispersed by supernovas into intergalactic space," adds coauthor Trevor Ponman of Birmingham University, U.K.

The Antennae give a closeup view of the type of collisions that were common in the crowded early universe and likely led to the formation of many of the stars that exist in the universe today. They might also provide a glimpse of the future of our Milky Way galaxy, which is on a collision course with the Andromeda galaxy. At the present rate, a crash such as the one now occurring in The Antennae could happen in about three billion years. Tremendous gravitational forces will disrupt both galaxies and reform them, probably as a giant elliptical galaxy peppered with hundreds of millions of young Sun-like stars.

And maybe hundreds of millions of habitable planets, too. These violent crashes aren't an end, after all. They're a new beginning.