One of the James Webb Space Telescope's science goals is to look back through time to when galaxies were young. Webb will do this by observing galaxies that are very distant, at over 13 billion light years away from us. To see such far-off and faint objects, Webb needs a large mirror. A telescope’s sensitivity, or how much detail it can see, is directly related to the size of the mirror area that collects light from the objects being observed. A larger area collects more light, just like a larger bucket collects more water in a rain shower than a small one.

Webb Telescope's scientists and engineers determined that a primary mirror 6.5 meters (21 feet 4 inches) across is what was needed to measure the light from these distant galaxies. Building a mirror this large is challenging, even for use on the ground. A mirror this large has never before been launched into space!

If the Hubble Space Telescope's 2.4 meter mirror were scaled to be large enough for Webb, it would be too heavy to launch into orbit. The Webb team had to find new ways to build the mirror so that it would be light enough - only one-tenth of the mass of Hubble's mirror per unit area - yet very strong.

One further challenge is to keep Webb's mirror cold. To see the first stars and galaxies in the early Universe, astronomers have to observe the infrared light given off by them, and use a telescope and instruments optimized for this light. Because warm objects give off infrared light, or heat, if Webb's mirror was the same temperature as the Hubble Space Telescope's, the faint infrared light from distant galaxies would be lost in the infrared glow of the mirror. Thus, Webb needs to be very cold ("cryogenic"), with its mirrors at around -220 degrees C (-364 degree F). The mirror as a whole must be able to withstand very cold temperatures as well as hold its shape.

To keep Webb cold, it will be sent into deep space, far from the Earth. Sunshields will shade the mirrors and instruments from the Sun's heat, as well as keep them separated from the warm spacecraft bus.

How Did NASA Come Up With These Ideas?

NASA set out to research new ways to build mirrors for telescopes. The Advanced Mirror System Demonstrator (AMSD) program was a four-year partnership between NASA, the National Reconnaissance Office and the US Air Force to study ways to build lightweight mirrors. Based on the ASMD studies, two test mirrors were built and fully tested. One was made from beryllium by Ball Aerospace; the other was built by Kodak (now ITT) and was made from a special type of glass.

A team of experts was chosen to test both of these mirrors, to determine how well they work, how much they cost and how easy (or difficult) it would be to build a full-size, 6.5-meter mirror. The experts recommended that beryllium mirror be selected for the James Webb Space Telescope, for several reasons, one being that beryllium holds its shape at cryogenic temperatures. Based on the expert team's recommendation, Northrop Grumman (the company that is leading the effort to build Webb) selected a beryllium mirror, and the project management at NASA's Goddard Space Flight Center approved this decision.

Because it is light and strong, beryllium is often used to build parts for supersonic (faster-than-the-speed-of-sound) airplanes and the Space Shuttle. It is also used in more down-to-Earth applications like springs and tools. Special care has to be taken when working with beryllium, because it is unhealthy to breathe in or swallow beryllium dust.

How and Where the Beryllium Mirrors Were Made

The beryllium to make Webb's mirror was mined in Utah and purified at Brush Wellman in Ohio. The particular type of beryllium used in the Webb mirrors is called O-30 and is a fine powder. The powder was placed into a stainless steel canister and pressed into a flat shape. Once the steel canister was removed, the resulting chunk of beryllium was cut in half to make two mirror blanks about 1.3 meters (4 feet) across. Each mirror blank was used to make one mirror segment; the full mirror is made from 18 hexagonal segments. 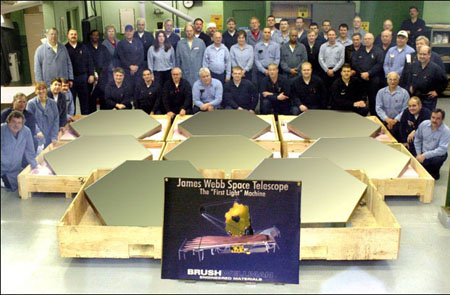 Once the mirror blanks passed inspection, they were sent to Axsys Technologies in Cullman, Alabama. The first two mirror blanks were completed in March 2004.

Once the mirror segments were shaped by Axsys, they were sent to Richmond, CA, to be polished by SSG/Tinsley.

Since many materials change shape when they change temperature, a test team from Ball Aerospace worked together with NASA engineers of Marshall Space Flight Center's X-ray and Cryogenic Facility (XRCF) to cool the mirror segments down to the temperature Webb will experience in deep space, -400 degrees Farenheit (-240 degrees Celsius). The change in mirror segment shape due to the exposure to these cryogenic temperatures was recorded by Ball Aerospace Engineers using a laser interferometer. This information, together with the mirrors, traveled back to California for final surface polishing at Tinsley. Cryogenic testing of the primary mirror segments began in at Marshall's XRCF by Ball Aerospace in 2009.

Once the mirror segment's final shape was corrected for any imaging effects due to cold temperatures, a thin coating of gold was applied. Gold improves the mirror's reflection of infrared light.

Below is the engineering design unit primary mirror segment coated in gold by by Quantum Coating Incorporated. Photo by Drew Noel. 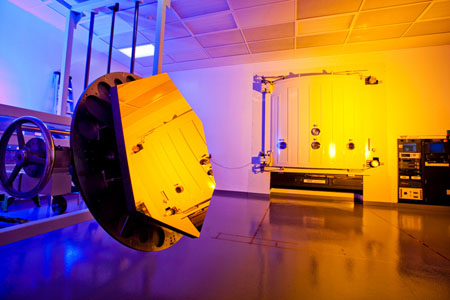 After the gold coating was applied, the mirrors once again traveled back to Marshall Space Flight Center for a final verification of mirror surface shape at cryogenic temperatures. The completed mirror segments then travel to NASA's Goddard Space Flight Center in Greenbelt, Maryland. 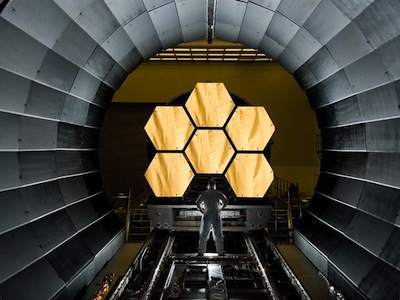 The secondary mirror, now completed, went through a similar process - here it is after being gold-coated by Quantum Coating Incorporated. 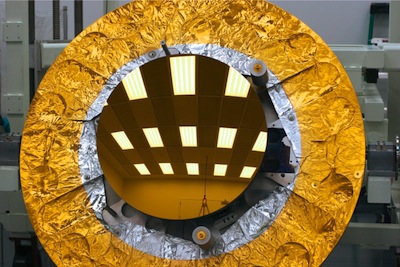