NASA released a new sped-up, 32-second video that shows engineers working on some of the James Webb Space Telescope's flight components to integrate them together to ensure they will work perfectly together in space.

The "NASA Webb Clean Room at Super-speed" video was filmed in the giant clean room at NASA's Goddard Space Flight Center in Greenbelt, Md., and produced at Goddard. The video is available on a NASA website in HD at: http://svs.gsfc.nasa.gov/goto?11220 . Testing of the two flight instruments that have been delivered to Goddard has been ongoing in the past several months. 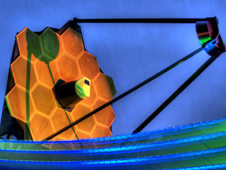 A full-scale model of the James Webb Space Telescope was built by the prime contractor, Northrop Grumman, to provide a better understanding of the size, scale and complexity of the observatory. The model is constructed mainly of aluminum and steel, weighs 12,000 lb., and is approximately 80 feet long, 40 feet wide and 40 feet tall. The model requires 2 trucks to ship it and assembly takes a crew of 12 approximately four days. Credit: Bobby Bradley/NASA
› Larger image Engineers and scientists at Goddard have begun assembling the four science instruments together. In a recently released video from NASA clean room personnel are shown installing the Fine Guidance Sensor (FGS) instrument into a larger structure called the Integrated Science Instrument Module (ISIM) structure. The ISIM structure is the larger skeletal structure in the video, and the FGS is the object on the end of a balance beam being moved by a crane.

“This is the integration of the FGS/NIRISS instrument onto the ISIM structure,” said Scott Lambros, Webb Instrument systems manager at Goddard. “This is the first of the four instruments to be integrated on the structure and is a very exciting time. It clearly shows we are moving into a new phase, from development, into the integration and then testing phase.”

The FGS is actually one half of a combination instrument with the Near-Infrared Imager and Slitless Spectrograph (NIRISS) science instrument. The FGS will enable the telescope to accurately and precisely point at the correct, intended objects for it to observe.

“The Webb telescope fine guidance sensor which provides pointing stability, or image stabilizer control, has been installed and being readied for testing together with other instruments in the ISIM," said Ray Lundquist, ISIM systems engineer at Goddard.

The FGS is packaged together as a single unit with the NIRISS science instrument and is developed and provided by the Canadian Space Agency and its prime contractor, COM DEV.

The ISIM is the whole integrated system of instruments on the Webb. It's one of four major elements that comprise the Webb Observatory flight system. It contains the four science instruments that will detect light from distant stars and galaxies, and planets orbiting other stars. The ISIM itself provides electrical, computational and heat management services for the science instruments.

“The MIRI instrument will be the next to be integrated onto the structure within the next month, with the NIRCam and NIRSpec instruments to follow later this year,” Lambros said.

Another video was released last year produced by the Space Science Telescope Institute of Baltimore, Md., in the "Behind the Webb" series. That video, called "Canada's Dynamic Duo," took viewers behind the scenes where the instruments were created, and is on-line.

The most powerful space telescope ever built, Webb is the successor to NASA's Hubble Space Telescope. Webb’s four instruments will reveal how the universe evolved from the big bang to the formation of our solar system. Webb is a joint project of NASA, the European Space Agency and the Canadian Space Agency.

To see a related "Behind the Webb" video on FGS and NIRISS, visit:
http://webbtelescope.org/webb_telescope/behind_the_webb/16