This image shows how Webb will be folded and stowed in the Ariane 5 spacecraft. Webb's solar panel is deployed about 1/2 hour after launch to provide power for the mission. The rest of the deployments take place in the next several days en route to L2. Credit: Northrop Grumman
› Larger image Everything is bigger in Texas and a life-sized model of the world's largest space telescope, NASA's James Webb Space Telescope will be on display at the South by Southwest (SXSW) Interactive Festival along with Webb-related exhibits, educational events, interactives, visualizations, scientists and much more. The NASA events at SXSW will occur March 8-10, 2013 in Austin.

The Webb telescope model is coming to SXSW just in time to highlight that this spring NASA is beginning to bring together some of the major parts of the observatory," said Eric Smith, Webb telescope deputy program director at NASA Headquarters, Washington. "In 2013, NASA will start to integrate the four science instruments into the structure that will attach to the telescope.

"This will be the Webb Telescope's biggest outreach event of the year at one of the best festivals in the country," said Amber Straughn, astrophysicist on the Webb telescope team at NASA's Goddard Space Flight Center in Greenbelt, Md. "Northrop Grumman is bringing their Webb telescope full scale model, we are organizing an exciting NASA Experience Tent which will showcase Microsoft Research's World Wide Telescope, and we are organizing star parties with speakers ranging from astrophysicists to astronauts to Nobel laureates."

NASA is partnering with Northrop Grumman, Space Telescope Science Institute, Ball Aerospace, Microsoft Research, and the University of Texas' Astronomy Department to bring an amazing display of science and technology to SXSW.

The Webb telescope life-sized model is as big as a tennis court. It was built by NASA's prime contractor to provide a better understanding of the size, scale and complexity of the observatory. The model is constructed mainly of aluminum and steel, weighs 12,000 lbs., and is approximately 80 feet long, 40 feet wide and 40 feet tall. The model requires two trucks to ship it and assembly takes a crew of 12 approximately four days. The Webb telescope full-scale model will be on display on March 8, 9 and 10.

In addition to the full-scale Webb telescope model, visitors can go to the NASA Experience Tent which will be filled with displays, videos, multimedia products, and hands-on activities. As part of the NASA tent, Microsoft Research will be running their World Wide Telescope on a 10 by 20 foot visualization wall which lets users fly through the universe and explore planets, stars, etc. Think of it as a giant flat planetarium. There will also be live video chats from both NASA Johnson Space Center and NASA Goddard. At Johnson, the Webb telescope will be tested in a giant chamber, while at Goddard, parts of the Webb are being assembled and tested in a giant cleanroom.

There's also a large educational aspect to Webb telescope's presence at SXSW. Local Austin K through 12 students have created Webb telescope-themed art/science projects that will be on display. Visitors may also encounter a "sidewalk astronomer" armed with a portable projection system that can project astronomy presentations on blank walls. Visitors can see the free e-books on Hubble and the Webb telescope and also pick up a free Webb telescope comic book called "Infrared Beyond the Visible."

Senior Project Scientist on the James Webb Space Telescope and Nobel Prize winning Astrophysicist John Mather will be one of the special guests at the festival.


A microsite website has been established to post information about Webb telescope events, the festival events, and showcase user submitted materials including pictures, tweets, etc. The microsite can be found at: go.nasa.gov/JWSTsxsw.

The real Webb will be the largest space telescope ever built. Once in orbit, the Webb telescope will look back in time more than 13 billion years to help us understand the formation of galaxies, stars and planets. 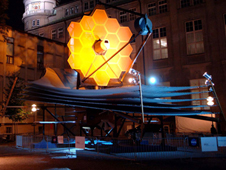 The James Webb Space Telescope full-scale model is set up in Munich, Germany, in June 2007. Credit: EADS Astrium
› Larger image "Everything is bigger in Texas, we couldn't bring just a small telescope," said Lynn Chandler, Communications Officer at NASA Goddard. Lynn is coordinating a Webb telescope display and will be assisting with STEM educational activities at the event.

For more information about the SXSW Festival, visit:
http://sxsw.com/

For information about the NASA Panel at SXSW, visit:
http://schedule.sxsw.com/2013/events/event_IAP4124