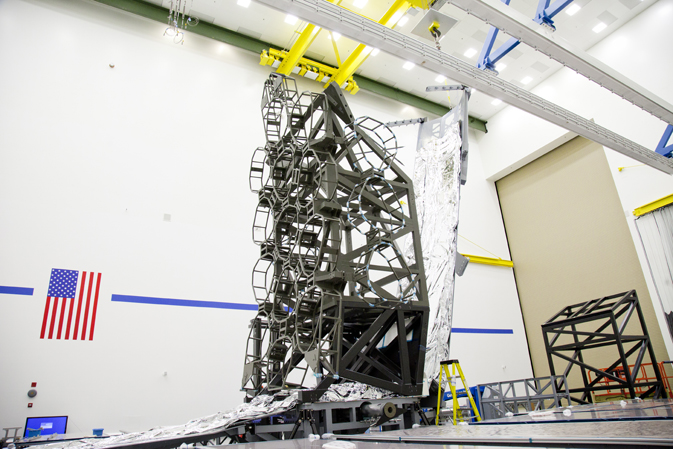 Engineers got a first-hand look at how the James Webb Space Telescope's sunshield would fold around the observatory while stored in the rocket that would take it to its orbit a million miles from Earth.

Engineers at Northrop Grumman Aerospace Systems in Redondo Beach, Calif., installed the first of five template sunshield membranes on a Webb telescope mock-up. The mock-up is a full-scale structural facsimile of the real observatory. Installing this first sunshield template membrane gave engineers a real-world understanding of how the sunshield will fold up and wrap around the observatory to stow it for launch before it unfurls in space. Engineers at Northrop Grumman recently verified that key folded membrane features that are critical to stowage and deployment align correctly with the hard structure of the observatory.

“The Webb’s large sunshield is one of its signature features and it was developed especially for the Webb by Northrop Grumman,” said Jim Flynn, manager of the Sunshield Product Team at Northrop Grumman.

Each of the sunshield's five membranes is unfurled and properly positioned by telescoping booms, spreader bars and cable drives. There are two electrical motor mechanisms called stem deployers, one on each side of the spacecraft. Their job is to "push out" from the inside of the telescoping booms to extend the booms and thus pull out the folded up membranes.

The sunshield on the Webb telescope will act as an umbrella to block heat radiating from the sun and Earth from reaching the cold section of the observatory. This is a critical function because the telescope and instruments must be cooled below 50 Kelvin (about -370 Fahrenheit) to allow them to see faint infrared emissions from distant astronomical objects. Spanning 20 meters by 12 meters (65.6 feet by 39.3 feet) when fully deployed, the sunshield is about the size of a regulation tennis court. The sunshield features five thin membranes of Kapton E with aluminum and doped-silicon coatings to reflect the sun's heat back into space. Kapton E is a polymer film developed by DuPont that can be folded like a blanket and can survive the harsh environment of space.

Each successive membrane of the sunshield rejects nearly all the radiant heat that reaches it, so the temperature behind each membrane is cooler than the one preceding it. The membranes are coated with a thin, vapor-deposited layer of highly reflective aluminum, except the sun-facing sides of the first two membranes, which are coated instead with a purple-hued, silicon-based, conductive reflective coating to better endure the intense radiation of the sun.

The positioning and separation of the five membranes is critical to the function of the sunshield as a heat-rejecting device. The membranes fan out so that they are closer together at the center and farther apart at the edges. This is so that heat reflects back and forth between them and moves out and away from the middle towards the edges and eventually overboard and away from the observatory. The vacuum of space in between the layers prevents heat from conducting from one layer to the next and allows it to reflect unimpeded out and away. This is why five thin, separated and fanned-out layers work better than one big thick sunshield would.

The James Webb Space Telescope is the world's next-generation space observatory and successor to the Hubble Space Telescope. The most powerful space telescope ever built, Webb will observe the most distant objects in the universe, provide images of the very first galaxies ever formed and see unexplored planets around distant stars. It is a joint project of NASA, the European Space Agency and the Canadian Space Agency.

To see a video of how the Sunshield will be deployed, visit:
http://www.youtube.com/watch?v=vpVz3UrSsE4

For a You Tube Video of the Sunshield Stretched Out, visit:
http://www.youtube.com/watch?v=1N5CGKzjjGE Rob Gutro
NASA's Goddard Space Flight Center, Greenbelt, Md.
› Back To Top