Grow Text SizeShrink Text Size
NASA Engineers Rehearse Placement of Webb Telescope's NIRSpec and Microshutters
The installation of equipment into the James Webb Space Telescope requires patience and precision. To prepare for the installation of the actual flight equipment and ensure perfection in the installations, scientists need to practice with an identical test unit. Scientists at NASA's Goddard Space Flight Center in Greenbelt, Md. are currently rehearsing with the placement of the Webb's Microshutter Array into the NIRSpec. 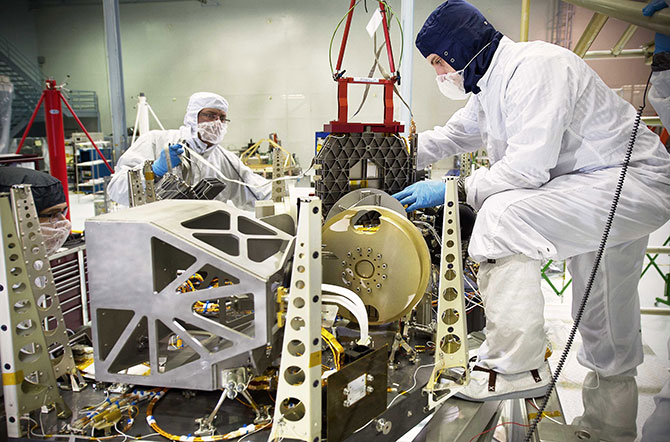 Engineers prepare and install the Microshutter Array simulator onto the NIRSpec Engineering Test Unit at NASA Goddard Space Flight Center. Credit: NASA/Chris Gunn
› Larger image
ETUs or engineering test units are simulations of equipment that will fly on the Webb telescope. Back in 2010, NASA Goddard received the ETU of the Webb telescope's Near-Infrared Spectrograph (NIRSpec) instrument from its manufacturer in Germany. Currently, engineers and scientists are preparing and installing the Microshutter Array simulator into the engineering test unit of the Webb telescope's Near-Infrared Spectrograph (NIRSpec) instrument.

"The implementation of a new technology like this depends not only on the conception of it, but it depends on the skilled hands of the engineers and technicians," said Harvey Moseley, a senior astrophysicist at NASA’s Goddard Space Flight Center in Greenbelt, Md. "Using the hundred-fold increase in observing speed provided by the microshutters opens the epoch of the universe where the first galaxies are forming and the elements of our current universe." 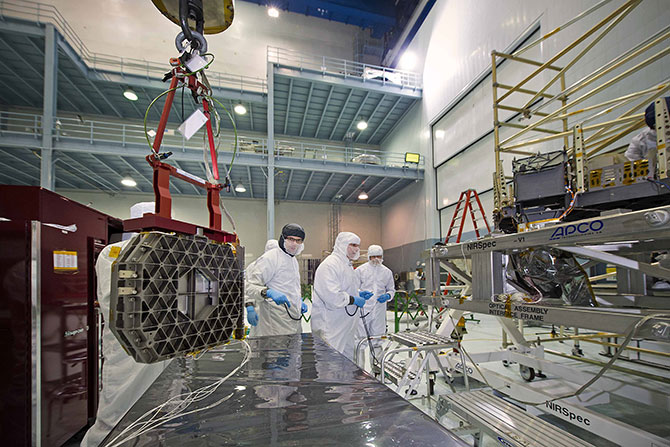 Engineers prepare and install the Microshutter Array simulator onto the NIRSpec Engineering Test Unit at NASA Goddard Space Flight Center. Credit: NASA/Chris Gunn
› Larger image
NIRSpec will be the principal spectrographic instrument aboard the Webb telescope. A spectrograph is an instrument that separates light into a spectrum. The NIRSpec's components will be sensitive to infrared light from a variety of astronomical objects--from the most distant galaxies in the universe to relatively nearby exoplanets within our Milky Way galaxy. NIRSpec will be capable of obtaining spectra of more than 100 objects in the cosmos simultaneously. Studying an object's spectrum is important, because it helps scientists determine distinct physical properties of the object, such distance, age and even chemical composition. These measurements are important in unraveling the history of galaxy and planet formation.

NIRSpec's Microshutter Array consists of a grid of more than 60,000 microscopic rectangular flaps that act as ‘shutters’ to open or close tiny openings or ‘windows’ for light to pass through. Each individual shutter measures 0.1 by 0.2 millimeters, or approximately the width of a few human hairs. Shutters can be individually addressed and controlled, allowing different ones to be opened or closed in any number of patterns and configurations in order to allow light only from select objects of interest to pass through for dispersion and spectroscopic analysis while rejecting light from other unwanted sources. It is this reconfigurable selectivity of the Microshutter array that enables NIRSpec to look at any field of objects in any part of the sky and do spectroscopy on so many specific objects simultaneously.

Through practice, engineers and scientists will be able to perfect the installation of the Microshutter Array into the NIRSpec.