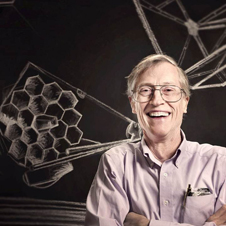 Reddit, a popular on-line community where users vote on content they find interesting, has a sub-forum for interviews with volunteers who answer questions about their specific experiences. This “I Am A ______, Ask Me Anything,” template attracts people from all walks of life, including high profile ones, like the president of the United States, and the Mars Curiosity team.

Mather is an astrophysicist at NASA's Goddard Space Flight Center in Greenbelt, Md. He won the Nobel Prize in physics in 2006 for his work with the COBE satellite and the big-bang theory.

Mather will make an exciting subject for an “Ask Me Anything” due to his work with the Webb telescope, the world’s next-generation space observatory and successor to the Hubble Space Telescope. The most powerful space telescope ever built, the Webb telescope will provide images of the first galaxies ever formed, and explore planets around distant stars. It is a joint project of NASA, the European Space Agency and the Canadian Space Agency.

Those interested in asking Mather questions about his experiences will be able to do so starting at approximately 12:30 p.m. He will answer questions for about an hour, beginning at 1 p.m. EST on the Reddit “IAmA” forum: http://www.reddit.com/r/IAmA/