Grow Text SizeShrink Text Size
Quasar May Be Embedded in Unusually Dusty Galaxy
Hubble astronomers have looked at one of the most distant and brightest quasars in the universe and are surprised by what they did not see: the underlying host galaxy of stars feeding the quasar. The best explanation is that the galaxy is shrouded in so much dust that the stars are completely hidden everywhere. Astronomers believe that the James Webb Space Telescope will reveal the galaxy.

All but the very first galaxies contain some dust—the early universe was dust-free until the first generation of stars started making dust through nuclear fusion. As these stars aged and burned out, they filled interstellar space with this dust as they lost their atmospheres. The quasar dates back to an early time in the universe's history—less than one billion years after the big bang—but was known to contain large amounts of dust from previous sub-millimeter observations. What surprised the researchers is how completely the dust is shrouding starlight within the galaxy—none of the starlight seems to be leaking out from around the quasar. 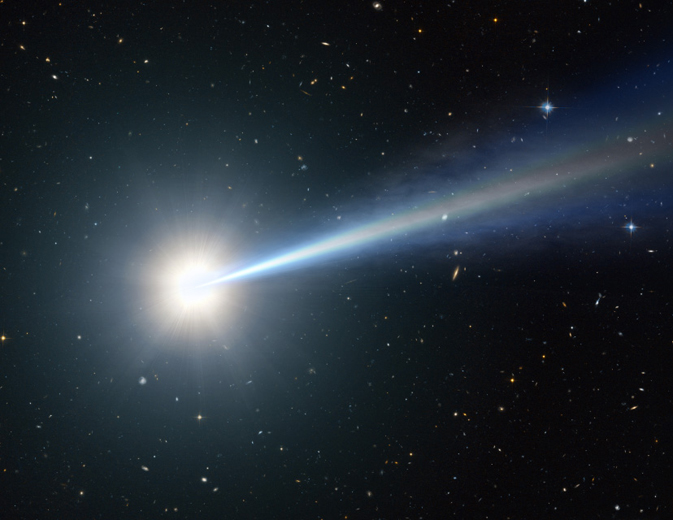 This artist's impression of one of the most distant, oldest, brightest quasars ever seen is hidden behind dust. The quasar dates back to less than one billion years after the big bang. The dust is also hiding the view of the underlying galaxy of stars that the quasar is presumably embedded in. (Credit: NASA/ESA/G.Bacon, STScI)
› Larger image
Quasars (short for quasi-stellar object) are the brilliant cores of galaxies where infalling material fuels a super-massive black hole. The black hole is so engorged that some of the energy escapes as powerful blasts of radiation from the surrounding disk of accreting material. This light can appear as a jet-like feature. If the beam shines in Earth's direction the “accretion disk” and jet surrounding the super-massive black hole can appear as a quasar that can outshine its surrounding galaxy a hundred or a thousand times.

The team speculates that the black hole is devouring the equivalent mass of a few suns per year. It may have been eating at a more voracious rate earlier to bulk up to an estimated mass of three billion solar masses in just a few hundred million years.

"If you want to hide the stars with dust, you need to make lots of short-lived massive stars earlier on that lose their mass at the end of their lifetime. You need to do this very quickly, so supernovae and other stellar mass-loss channels can fill the environment with dust very quickly," said Rogier Windhorst of Arizona State University (ASU), Tempe, Ariz. "You also have to be forming them throughout the galaxy to spread the dust throughout the galaxy," added Matt Mechtley, also of ASU.

The quasar was first identified in the Sloan Digital Sky Survey (SDSS). Only a handful of these very distant ultra-luminous quasars were found by the SDSS in about one quarter of the whole sky. Follow-up observations at sub-millimeter wavelengths detected significant dust within the galaxy, but did not show how and where dust was distributed, and if or where star-clusters might be visible through the dust. Most nearby galaxies --- even if rather dusty --- still have some regions where stars or star-clusters poke through the dust.

Hubble was used to very carefully subtract light from the quasar image and look for the glow of surrounding stars. The team accomplished this by looking at the glow of a reference star in the sky near the quasar and using it as a template to remove the quasar light from the image. Once the quasar was removed, no significant underlying starlight was detected. The underlying galaxy's stars could have been easily detected, had they been present and relatively unobscured by dust in at least some locations.

"It is remarkable that Hubble didn't find any of the underlying galaxy," said Windhorst. "The underlying galaxy is everywhere much fainter than expected, and therefore must be in a very dusty environment throughout. It's one of the most rip-roaring forest fires in the universe. It’s creating so much smoke that you're not seeing any starlight, anywhere. The forest fire is complete, not a tree is spared." 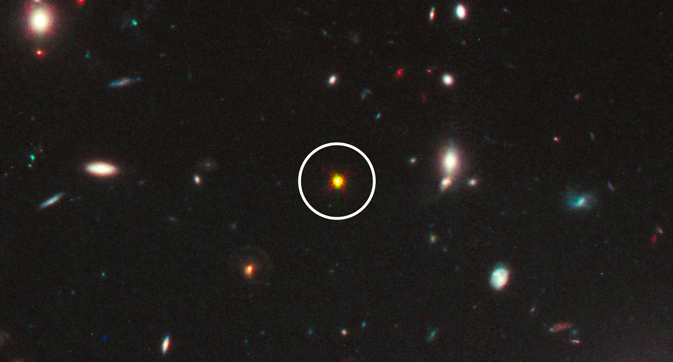 This is a Hubble Space Telescope view of one of the most distant and luminous quasars ever seen (circled in white) and dates to less than one billion years after the big bang. This near-infrared light image was taken with Hubble's Wide Field Camera 3 in December 2010 and January 2011. (Credit: NASA/ESA/M. Mechtley, R. Windhorst, Arizona State University)
› Larger image
"Because we don't see the stars, we can rule out that the galaxy that hosts this quasar is a normal galaxy," said Mechtley. "It’s among the dustiest galaxies in the universe, and the dust is so widely distributed that not even a single clump of stars is peeking through. We're very close to a plausible detection, in the sense that if we had gone a factor of two deeper we might have detected some light from its young stars, even in such a dusty galaxy."

This result was published in the Sept. 10 issue of the Astrophysical Journal Letters in a paper by M. Mechtley, R. Windhorst, and an international team of collaborators.

NASA's planned James Webb Space Telescope will pursue this object. "The Webb telescope is designed to make a definitive detection of this," said Windhorst. We will get solid detections of the stars with Webb's better sensitivity to longer wavelengths of light, which will better probe the dusty regions in these young galaxies.

The Webb telescope will also have the infrared sensitivity to peer all the way back to 200 million years after the big bang. If galaxies started forming stars at this early epoch, Webb is designed and being built to detect them.

The Hubble Space Telescope is a project of international cooperation between NASA and the European Space Agency. NASA's Goddard Space Flight Center in Greenbelt, Md., manages the telescope. The Space Telescope Science Institute (STScI) in Baltimore, Md., conducts Hubble science operations and is the science and mission operations center for the James Webb Space Telescope. STScI is operated for NASA by the Association of Universities for Research in Astronomy, Inc., in Washington, D.C.