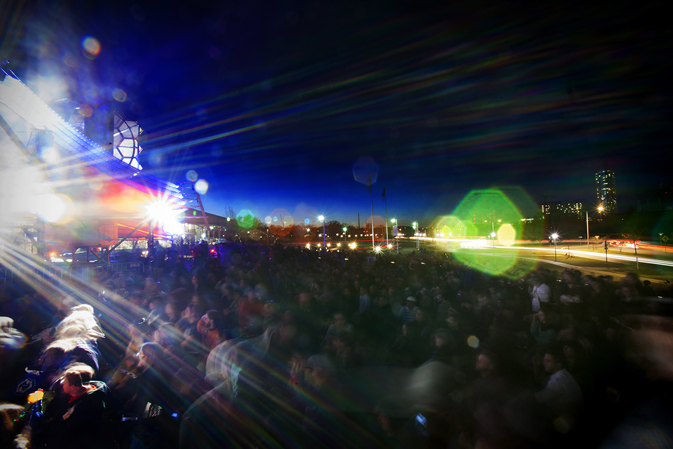 Looking up through hundreds of colored filters and spectral glasses, 526 people shattered the record for the Largest Astronomy Lesson. Under the Texas night sky, students were instructed on the lawn of the Long Center for the Performing Arts at the South by Southwest (SXSW) festival in Austin on Sunday, March 10, 2013.

In the spirit of Science, Technology, Engineering and Mathematics (STEM) Education Coalition outreach at SXSW, NASA, the Space Telescope Science Institute (STScI) and Northrop Grumman organized the record breaking event which was arbitrated by the Guinness World Records organization. In breaking this record, instructors aimed to shine light on the importance of astronomy with the full-scale model of the James Webb Space Telescope as their backdrop. 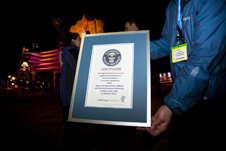 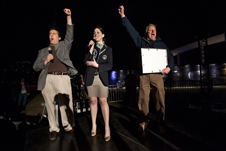 Frank Summers, an astrophysicist from STScI, and Dan McCallister, education specialist at STScI, cheer with the crowd after Sara Wilcox, Guinness World Records adjudicator, awards the certificate. Credit: Alex Evers/Northrop Grumman
› Larger image During the lesson, Frank Summers, an astrophysicist, and Dan McCallister, an education specialist, both from STScI, Baltimore, Md., demonstrated how astronomers use light and color to uncover the secrets of the cosmos. The lesson, prepared by STScI’s Office of Public Outreach, explained how astronomers use light and color to gain information about objects nearby like the moon and asteroids to young galaxies that are billions and billions of light-years away, and the importance of observing in wavelengths across the electromagnetic spectrum (the full range of light waves possible).

"Astronomy awakens the natural curiosity and awe in all of us," said Summers. "Many people think that astronomy and physics is only complicated math equations. They don't recognize how natural it is and how much they already know."

Participants used glasses that break light up into the different colors of the rainbow, as well as colored filter glasses to see first hand how light can be broken down into its different wavelengths. The instructors showed how looking at a particular color can be a combination of different wavelengths of light. They also showed how different filters are used to select certain colors for specific studies of an astronomical object.

Working with the crowd, experts like Alberto Conti, astrophysicist and Webb telescope innovation scientist at STScI, explained how astronomy is more than just pretty pictures. "Astronomy tries to answer the questions that everyone wonders about like, ‘How did we get here?’ Astronomy showcases the physical laws of nature," says Conti. "It shows all of the processes. You can learn a lot about physics and nature by studying it."

Previously, the record for the Largest Astronomy Lesson was held in Mexico with the record of 458 participants, organized by Juarez Competitiva, set on Oct. 14, 2011.

Guinness World Records (GWR) is the global authority on record-breaking achievements. First published in 1955, the annual Guinness World Record book has become one of the biggest-selling copyright titles of all time, selling 120 million copies to date in 22 languages and in more than 100 countries. GWR is also available on a number of platforms including GWR global television, digital media and online record processing services. Laura Betz
NASA's Goddard Space Flight Center, Greenbelt, Md.