Grow Text SizeShrink Text Size
2012: The Webb Telescope's Big Year of Progress
The James Webb Space Telescope marked another year of significant progress in 2012 as flight instrumentation was completed and delivered to NASA.

The year brought forth the delivery of two types of flight mirrors, the Mid-Infrared Instrument (MIRI), the Fine Guidance Sensor and Near-Infrared Imager and Slitless Spectrograph (FGS/NIRISS), and the completion of the center section of the primary mirror backplane. The Webb project modified the historic Chamber A at NASA's Johnson Space Center, Houston, Texas, to enable the Webb telescope’s optics and instrument systems to be tested. In addition to the telescope and test chambers coming together, spinoff technology from the Webb has already been used in industries to improve people's lives. 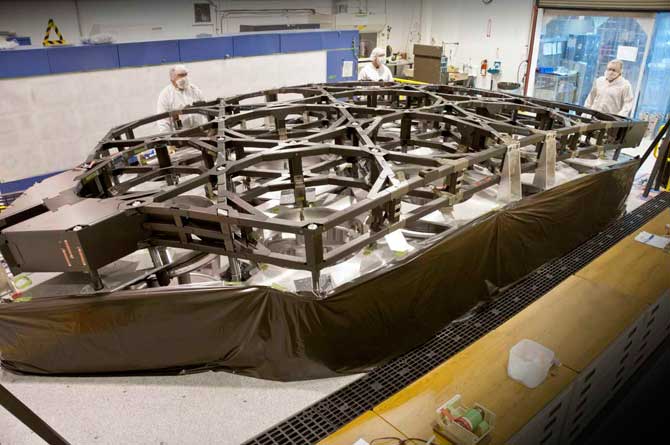 › Larger image
Engineers at ATK work on the center section of the "backplane" support structure that will hold Webb's mirror segments. Credit: ATK 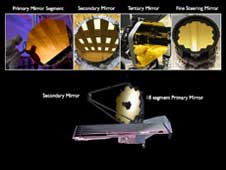 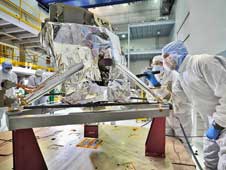 On Sept. 17, 2012, two primary mirror segments that will fly aboard NASA's James Webb Space Telescope arrived at NASA's Goddard Space Flight Center in Greenbelt, Md. The flight secondary mirror and a third primary mirror segment arrived at NASA Goddard on Nov. 5, 2012, and are currently being stored in the giant clean room. All of the mirrors are made of beryllium, which was selected for its stiffness, light weight and stability at extremely cold cryogenic temperatures. Bare beryllium is not very reflective at Webb’s shortest wavelengths, so each mirror is coated with gold. The microscopic gold coating enables the mirrors to efficiently reflect infrared light (which is what the Webb telescope's cameras see).

The Mid-infrared Instrument (MIRI) flight hardware was delivered to NASA’s Goddard Space Flight Center on May 28 2012, for integration into the ISIM. The MIRI will allow scientists to study cold and distant objects in greater detail than ever before and with unprecedented sensitivity. MIRI will observe light with wavelengths in the mid-infrared range of 5 microns to 28.5 microns, which is longer wavelength than human eyes can detect. Of Webb’s four instruments, MIRI is the only one that works at the longest wavelengths. MIRI will be integrated into Webb’s science instrument payload known as the Integrated Science Instrument Module (ISIM). An international team of European scientists and engineers collaborated with JPL to produce this instrument.

The second of four instruments to fly aboard NASA's James Webb Space Telescope was delivered to NASA Goddard on July 30. The Fine Guidance Sensor (FGS) will enable the telescope to accurately and precisely point at the correct targets. The FGS is packaged together as a single unit with the Near-Infrared Imager and Slitless Spectrograph (NIRISS) science instrument. The FGS/NIRISS will also be integrated into Webb's ISIM.

The FGS consists of two identical cameras that will allow the telescope to determine its position, locate its celestial targets, and remain pointed to collect high-quality data. The FGS will guide the telescope with incredible precision, with an accuracy of one millionth of a degree of angle. Although the NIRISS is packaged with the FGS, it is functionally independent. NIRISS provides unique capabilities that will aid in finding the earliest and most distant objects in the Universe’s history. It will also peer through the glare of nearby stars to detect and study planets in other Solar Systems. The FGS/NIRISS was developed by the Canadian Space Agency.

For three years, engineers at NASA's Johnson Space Center in Houston, Texas have been building and remodeling the interior of Chamber A, the largest thermal vacuum chamber in the world, so it will meet the temperature requirements to test the Webb. They installed a gaseous helium cooling system that brought the interior of the chamber down to 11 degrees kelvin above absolute zero (-439.9 F/-262.1C). Chamber A testing will confirm that the telescope and science instrument systems will perform properly together in the cold temperatures of space. Additional test support equipment includes mass spectrometers, infrared cameras and television cameras so that engineers can keep an eye on the Webb while it's being tested.

New technologies developed for NASA's James Webb Space Telescope have already been adapted and applied to commercial applications in various industries including optics, aerospace, astronomy, medical and materials. Some of these technologies can be explored for use and licensed through NASA's Office of the Chief Technologist at NASA's Goddard Space Flight Center, Greenbelt, Md.

For example, the optical measuring technology developed for the Webb, called "wavefront sensing" has been applied to eye health and has allowed improvements in measurement of human eyes, diagnosis of ocular diseases and potentially improved surgery.

The powerful primary mirrors of the James Webb Space Telescope will be able to detect the light from the first luminous objects that formed when the universe was young, as well as distant galaxies and nearby stars and their planets. Altogether, 21 mirrors comprise the Webb's telescope optics -- 18 primary mirror segments working together as one large 21.3-foot (6.5-meter) primary mirror, the secondary mirror mounted on a tripod above the primary mirror, and the tertiary mirror and the fine steering mirror that are both located inside an assembly near the center of the primary mirror.

The most powerful space telescope ever built, the Webb telescope will provide images of the first galaxies ever formed, and explore planets around distant stars. It is a joint project of NASA, the European Space Agency and the Canadian Space Agency.