Voyager at 30: Looking Beyond and Within
A mission that was supposed to last just five years is celebrating its 30th anniversary this fall. Scientists continue to receive data from the Voyager 1 and 2 spacecraft as they approach interstellar space.

The twin craft have become a fixture of pop culture, inspiring novels and playing a central role in television shows, music videos, songs and movies from the 1980s and 1990s. Many of these fictional works focus on what would happen if an alien race were able to locate Earth via Voyager's famous golden records, which include sounds and images of Earth. The selections portray people young and old, male and female -- not to mention examples of many other species -- and include information about every continent on the planet, as well as Earth's location in space. 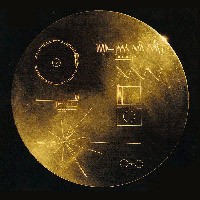 Earlier NASA missions included plaques with information about Earth, in case an intelligent alien race intercepted the probes. This spurred, John Casani, Voyager's first project manager, to appoint astronomer and author Carl Sagan to head a committee to come up with a message for Voyager.

In his book "Murmurs of Earth," Sagan later described how the committee created the record and chose its contents. Physicist Frank Drake suggested the idea of a record that would have pictures on one side and sounds on the other side. The group had less than six weeks to come up with a record that would represent the entire population of Earth -- in addition to the planet itself -- if it were ever discovered by an intelligent alien race.

Although the chances of extraterrestials finding the message are extremely slim, the Voyager golden record has become an icon. "It's the classic message in a bottle. The likelihood of finding it is small, but the payoff is huge if it is found," said Ann Druyan, a science media producer and author. Druyan was appointed creative director of the record project and later married Sagan.

Ed Stone, Voyager's project scientist and former JPL director, explained that although there is almost no chance of the record being found, the record is important as a message to ourselves.

"In a sense it's a unifying message," Stone said. "It's a message from Earth. It contains greetings in many languages, music from many cultures and images that portray our home planet. It's our attempt to say what is Earth, and it's a record of who we think we are." Druyan also explained that the coupling of music and science was an especially compelling reason to devote so much energy to the record.

"The record represented the idea that science and technology could come together with art," said Druyan, who also designed the sound essay.. "It's one of the few totally great stories that we have about humans. It cost the taxpayers virtually nothing, nobody got killed. It was a way to celebrate the glory of being alive on this tiny blue dot in 1977.

"This was the most romantic and beautiful project ever attempted by NASA. It had the sounds of a kiss, a mother saying hello to her newborn baby for the first time, all that glorious music. Remember, this was during the Cold War. Everyone was living with the knowledge that 50,000 nuclear weapons could go off at any time, and there was a lot of angst about the future. This was something positive -- a way to represent Earth and put our best foot forward. That was irresistible."

Carl Sagan's son Nick was six years old in 1977 when the Voyager records were being assembled. The records feature a recording of him as a child saying, "Hello from the children of planet Earth."

"I had no sense of the magnitude of it at the time," said Nick Sagan, who partially followed in his late father's footsteps by pursuing a career as a science fiction writer. "Literally it was my parents putting me in front of a microphone and saying, 'What would you say to extraterrestrials?'"

"It's been a challenge for the rest of my life to live up to that honor. It's always there in my subconscious," he said. "My dad inspired so many people to do so many great things -- to not take things at face value and to look at evidence to search for the truth. It's something that I look to as a beacon."

Sagan said that he and his father discussed the Voyager discoveries in the context of their search for life. They got excited when the spacecraft photographed Titan and Europa, and Sagan noted a change in his father as the years went by.

"One of the things that surprised him was that we didn't find life during his lifetime," he said. "He started to realize that if there's no other life out there, and life is so rare, we need to protect ours. I saw a shift in him. That's when he started to become more socially and politically conscious."

In the end, Sagan believes that Voyager and other extraterrestrial missions are important because of their process rather than their discoveries.

"The question is: What's it all about?" he said. "If we do find life it will change us, but if not it will change things also. The act of looking will tell us so much, and we will learn so much about ourselves."