This video drops in on mission control for NASA's Voyager spacecraft as Voyager 1 sends back data from the far reaches of our solar system.     › Download video 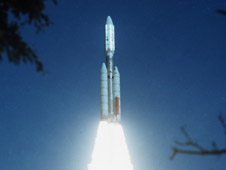 Voyager 2 was launched on August 20, 1977, from the NASA Kennedy Space Center at Cape Canaveral in Florida, propelled into space on a Titan/Centaur rocket. Image credit: NASA/JPL-Caltech
› Full image and caption
› See image gallery

Thirty-five years ago today, NASA's Voyager 2 spacecraft, the first Voyager spacecraft to launch, departed on a journey that would make it the only spacecraft to visit Uranus and Neptune and the longest-operating NASA spacecraft ever. Voyager 2 and its twin, Voyager 1, that launched 16 days later on Sept. 5, 1977, are still going strong, hurtling away from our sun. Mission managers are eagerly anticipating the day when they break on through to the other side – the space between stars.

"Even 35 years on, our rugged Voyager spacecraft are poised to make new discoveries as we eagerly await the signs that we've entered interstellar space," said Ed Stone, Voyager project scientist at the California Institute of Technology in Pasadena. "Voyager results turned Jupiter and Saturn into full, tumultuous worlds, their moons from faint dots into distinctive places, and gave us our first glimpses of Uranus and Neptune up-close. We can't wait for Voyager to turn our models of the space beyond our sun into the first observations from interstellar space."

Scientists eagerly awaiting the entry of the two Voyagers into interstellar space have recently seen changes from Voyager 1 in two of the three observations that are expected to be different in interstellar space. The prevalence of high-energy particles streaming in from outside our solar system has jumped, and the prevalence of lower-energy particles originating from inside our solar system has briefly dipped, indicating an increasing pace of change in Voyager 1’s environment. Voyager team scientists are now analyzing data on the direction of the magnetic field, which they believe will change upon entry into interstellar space.

"We continue to listen to Voyager 1 and 2 nearly every day," said Suzanne Dodd, Voyager project manager at NASA's Jet Propulsion Laboratory, Pasadena, Calif. "The two spacecraft are in great shape for having flown through Jupiter’s dangerous radiation environment and having to endure the chill of being so far away from our sun."

Dodd and her team have been carefully managing the use of power from the continually diminishing energy sources on the two spacecraft. They estimate that the two spacecraft will have enough electrical power to continue collecting data and communicating it back to Earth through 2020, and possibly through 2025. While no one really knows how long it will take to get to interstellar space, Voyager scientists think we don't have long to wait. And, besides, the first 35 years have already been a grand ride.

A public lecture about the journey of the twin Voyager spacecraft will be held at JPL on Sept. 4. More information is available at http://www.jpl.nasa.gov/events/lectures_archive.cfm?year=2012&month=9 . The Voyager spacecraft were built by JPL, which continues to operate both. JPL is a division of the California Institute of Technology. The Voyager missions are a part of the NASA Heliophysics System Observatory, sponsored by the Heliophysics Division of the Science Mission Directorate in Washington.

For more information about the Voyager spacecraft, visit: http://www.nasa.gov/voyager and http://voyager.jpl.nasa.gov