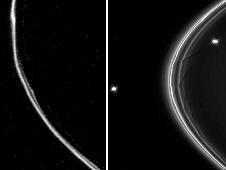 The image of Saturn's F ring on the left from NASA's Voyager 1 was released on Nov. 12, 1980. The image on the right shows a closer view of the ring obtained by NASA's Cassini spacecraft on April 13, 2005. Image credit: NASA/JPL and NASA/JPL/SSI
› Full image and caption 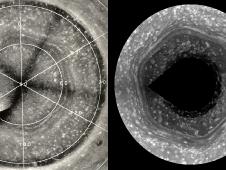 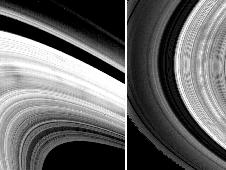 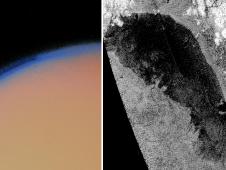 NASA's Voyager 1 obtained the image of Titan on the left on Nov. 12, 1980. The image on the right, showing a lake on Titan's surface, was obtained by NASA's Cassini spacecraft on Jan. 12, 2010. Image credit: NASA/JPL and NASA/JPL-Caltech
› Full image and caption
› Images of Enceladus
› Images of Saturn


Ed Stone, project scientist for NASA's Voyager mission, remembers the first time he saw the kinks in one of Saturn's narrowest rings. It was the day the Voyager 1 spacecraft made its closest approach to the giant ringed planet, 30 years ago. Scientists were gathering in front of television monitors and in one another's offices every day during this heady period to pore over the bewildering images and other data streaming down to NASA's Jet Propulsion Laboratory in Pasadena, Calif.

Stone drew a crude sketch of this scalloped, multi-stranded ring, known as the F ring, in his notebook, but with no explanation next to it. The innumerable particles comprising the broad rings are in near-circular orbits about Saturn. So, it was a surprise to find that the F ring, discovered just a year before by NASA's Pioneer 11 spacecraft, had clumps and wayward kinks. What could have created such a pattern?

"It was clear Voyager was showing us something different at Saturn," said Stone, now based at the California Institute of Technology in Pasadena. "Over and over, the spacecraft revealed so many unexpected things that it often took days, months and even years to figure them out."

The F ring curiosity was only one of many strange phenomena discovered in the Voyager close encounters with Saturn, which occurred on Nov. 12, 1980, for Voyager 1, and Aug. 25, 1981, for Voyager 2. The Voyager encounters were responsible for finding six small moons and revealing the half-young, half-old terrain of Enceladus that had to point to some kind of geological activity.

Images from the two encounters also exposed individual storms roiling the planet's atmosphere, which did not show up at all in data from Earth-based telescopes. Scientists used Voyager data to resolve a debate about whether Titan had a thick or thin atmosphere, finding that Titan was shrouded in a thick haze of hydrocarbons in a nitrogen-rich atmosphere. The finding led scientists to predict there could be seas of liquid methane and ethane on Titan's surface.

"When I look back, I realize how little we actually knew about the solar system before Voyager," Stone added. "We discovered things we didn't know were there to be discovered, time after time."

In fact, the Voyager encounters sparked so many new questions that another spacecraft, NASA's Cassini, was sent to probe those mysteries. While Voyager 1 got to within about 126,000 kilometers (78,300 miles) above Saturn's cloud tops, and Voyager 2 approached as close as about 100,800 kilometers (62,600 miles), Cassini has dipped to this altitude and somewhat lower in its orbits around Saturn since 2004.

Because of Cassini's extended journey around Saturn, scientists have found explanations for many of the mysteries first seen by Voyager. Cassini has uncovered a mechanism to explain the new terrain on Enceladus – tiger stripe fissures with jets of water vapor and organic particles. It revealed that Titan indeed does have stable lakes of liquid hydrocarbons on its surface and showed just how similar to Earth that moon really is. Data from Cassini have also resolved how two small moons discovered by Voyager – Prometheus and Pandora – tug on the F ring to create its kinked shape and wakes that form snowballs.

"Cassini is indebted to Voyager for its many fascinating discoveries and for paving the way for Cassini," said Linda Spilker, Cassini project scientist at JPL, who started her career working on Voyager from 1977 to 1989. "On Cassini, we still compare our data to Voyager's and proudly build on Voyager's heritage."

But Voyager left a few mysteries that Cassini has not yet solved. For instance, scientists first spotted a hexagonal weather pattern when they stitched together Voyager images of Saturn's north pole. Cassini has obtained higher-resolution pictures of the hexagon – which tells scientists it's a remarkably stable wave in one of the jet streams that remains 30 years later – but scientists are still not sure what forces maintain the hexagon.

Even more perplexing are the somewhat wedge-shaped, transient clouds of tiny particles that Voyager discovered orbiting in Saturn's B ring. Scientists dubbed them "spokes" because they looked like bicycle spokes. Cassini scientists have been searching for them since the spacecraft first arrived. As Saturn approached equinox, and the sun's light hit the rings edge-on, the spokes did reappear in the outer part of Saturn's B ring. But Cassini scientists are still testing their theories of what might be causing these odd features.

"The fact that we still have mysteries today goes to show how much we still have to learn about our solar system," said Suzanne Dodd, Voyager's project manager, based at JPL. "Today, the Voyager spacecraft continue as pioneers traveling toward the edge of our solar system. We can't wait for the Voyager spacecraft to enter interstellar space – true outer space – and make more unexpected discoveries."