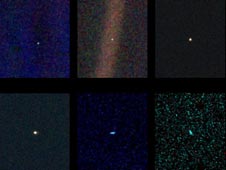 These six narrow-angle color images were made from the first ever 'portrait' of the solar system taken by Voyager 1, which was more than 4 billion miles from Earth and about 32 degrees above the ecliptic. Image credit: NASA/JPL
› Full image and caption 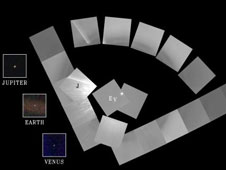 The cameras of Voyager 1 on Feb. 14, 1990, pointed back toward the sun and took a series of pictures of the sun and the planets, making the first ever "portrait" of our solar system as seen from the outside. Image credit: NASA/JPL
› Full image and caption 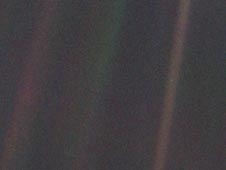 This narrow-angle color image of the Earth, dubbed 'Pale Blue Dot', is a part of the first ever 'portrait' of the solar system taken by Voyager 1. Image credit: NASA/JPL
› Full image and caption Twenty years ago on February 14, NASA's Voyager 1 spacecraft had sailed beyond the outermost planet in our solar system and turned its camera inward to snap a series of final images that would be its parting valentine to the string of planets it called home.

Mercury was too close to the sun to see, Mars showed only a thin crescent of sunlight, and Pluto was too dim, but Voyager was able to capture cameos of Neptune, Uranus, Saturn, Jupiter, Earth and Venus from its unique vantage point. These images, later arranged in a large-scale mosaic, make up the only family portrait of our planets arrayed about the sun.

The Apollo missions in the 1960s and 70s had already altered our perspective of Earth by returning images of our home planet from the moon, but Voyager was providing a completely new perspective, said Ed Stone, Voyager project scientist at the California Institute of Technology in Pasadena.

"It captured the Earth as a speck of light in the vastness of the solar system, which is our local neighborhood in the Milky Way galaxy, in a universe replete with galaxies," Stone said.

In the years since the twin Voyager spacecraft were launched in 1977, they had already sent back breathtaking, groundbreaking pictures of the gas giants Jupiter, Saturn, Uranus and Neptune. It took Voyager 1 more than 12 years to reach the place where it took the group portrait, 6 billion kilometers (almost 4 billion miles) away from the sun. The imaging team started snapping images of the outer planets first because they were worried that pointing the camera near the sun would blind it and prevent more picture-taking.

Candy Hansen, a planetary scientist based at NASA's Jet Propulsion Laboratory in Pasadena, Calif., who worked with the Voyager imaging team at the time, remembers combing through the images and finally finding the image of Earth. She had seen so many pictures over the years that she could distinguish dust on the lens from the black dots imprinted on the lens for geometric correction.

There was our planet, a bright speck sitting in a kind of spotlight of sunlight scattered by the camera. Hansen still gets chills thinking about it.

"I was struck by how special Earth was, as I saw it shining in a ray of sunlight," she said. "It also made me think about how vulnerable our tiny planet is."

This was the image that inspired Carl Sagan, the the Voyager imaging team member who had suggested taking this portrait, to call our home planet "a pale blue dot."

As he wrote in a book by that name, "That's here. That's home. That's us. On it everyone you love, everyone you know, everyone you ever heard of, every human being who ever was, lived out their lives. … There is perhaps no better demonstration of the folly of human conceits than this distant image of our tiny world."

After these images were taken, mission managers started powering down the cameras. The spacecraft weren't going to fly near anything else, and other instruments that were still collecting data needed power for the long journey to interstellar space that was ahead.

The Voyagers are still transmitting data daily back to Earth. Voyager 1 is now nearly 17 billion kilometers (more than 10 billion miles) away from the sun. The spacecraft have continued on to the next leg of their interstellar mission, closing in on the boundary of the bubble created by the sun that envelops all the planets. Scientists eagerly await the time when the Voyagers will leave that bubble and enter interstellar space.

"We were marveling at the vastness of space when this portrait was taken, but 20 years later, we're still inside the bubble," Stone said. "Voyager 1 may leave the solar bubble in five more years, but the family portrait gives you a sense of the scale of our neighborhood and that there is a great deal beyond it yet to be discovered."

The Voyagers were built by JPL, which continues to operate both spacecraft. Caltech manages JPL for NASA.