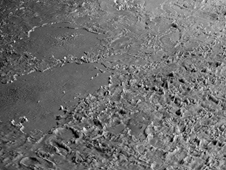 This view of the volcanic plains of Neptune's moon Triton was produced using topographic maps derived from images acquired by NASA's Voyager spacecraft during its August 1989 flyby, 20 years ago this week.
› Related Video
› Full image and caption 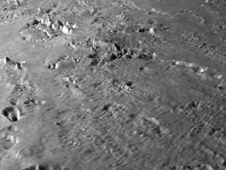 This view shows a close-up of a prominent chain of volcanic features surrounded by smooth volcanic plains formed by lavas or ash deposits of water or other ices, such as methane or ammonia.
› Full image and caption 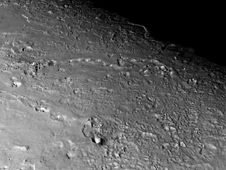 This regional view shows a variety of terrains on Triton, including the smooth volcanic plains in the foreground, formed by icy lavas.
› Full image and caption Newly released images commemorate the 20-year anniversary of the Voyager flyby of Neptune's moon Triton on Aug. 24, 2009.

Triton was the last solid object visited by NASA's Voyager 2 spacecraft as it headed toward the edges of our solar system.

Triton, Neptune's largest moon, is one of the "coolest" objects in the solar system, literally, with a surface temperature of minus 235 degrees Celsius (minus 391 degrees Fahrenheit). Voyager 2 discovered that Triton has active geysers.

The images and a movie show the moon's sparsely cratered surface with smooth volcanic plains, mounds and round pits formed by icy lava flows.

More information on the Voyagers is available at: http://voyager.jpl.nasa.gov/index.html .
› Back To Top