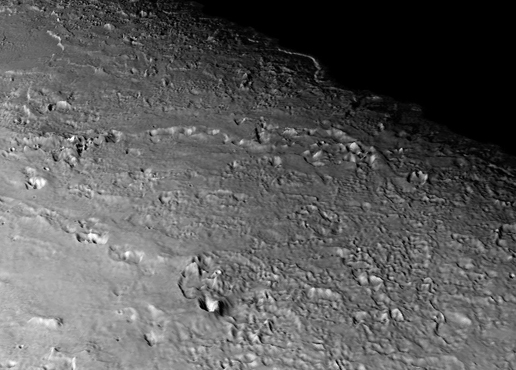 This view of the volcanic plains of Neptune's moon Triton was made from topographic mapping of images obtained by NASA's Voyager spacecraft during its August 1989 flyby, 20 years ago this week.

Triton, Neptune's largest moon, was the last solid object visited by the Voyager 2 spacecraft on its epic 10-year tour of the outer solar system. This regional view shows a variety of terrains on Triton, including the smooth volcanic plains in the foreground, formed by icy lavas. Parts of this surface have been eroded, forming mounds and depressions with relief of tens to a few hundred meters (several hundred feet). The round pits and mounds across the center of the scene are probably volcanic explosion or collapse craters, the largest of which (at bottom center) is 250 meters deep (820 feet) and 15 kilometers (about 9 miles) across. Many of these pits are aligned in chains similar to those seen in basaltic volcanic areas on Earth, such as Craters of the Moon National Monument in Idaho, except the lavas on Triton are water and other ices that erupted onto the surface. In the distance is one of two large walled smooth plains of unknown origin. These plains are roughly 200 kilometers (124 miles) across.

The surface of Triton is very rugged, scarred by rising blobs of ice (diapirs), faults and volcanic pits and lava flows composed of water and other ices. The surface is also extremely young and sparsely cratered. It may even be younger than the surface of Europa, one of the first objects visited by the Voyager spacecraft 30 years ago this summer, and could be geologically active today. Although locally very rugged, Triton has no large mountains or deep basins and regional relief is low, a consequence of its high internal heat and the low strength of most ices. The scene is on the order of 500 kilometers (310 miles) across and is taken from a new flyover movie across the equatorial region of Triton commemorating the Voyager 20-year anniversary of this flyby. Vertical relief has been exaggerated by a factor of 25 to aid interpretation.

The raw data from which this product was developed were retrieved from the Planetary Data System's data archives. The Jet Propulsion Laboratory, a division of the California Institute of Technology in Pasadena, manages the mission for NASA's Science Mission Directorate, Washington, D.C. The Voyager spacecraft and its two onboard cameras were designed, developed and assembled at JPL. This image was processed by Paul Schenk (http://www.lpi.usra.edu/lpi/schenk/) at the Lunar and Planetary Institute.