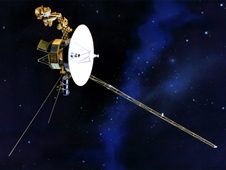 Voyager data beamed back from their current location has lead to new computer models that show the edge of our solar system is not smooth, but filled with a turbulent sea of magnetic bubbles.

The finding suggests we need to revise our picture of this previously unexplored region so critical for understanding how cosmic rays are created and reach near-Earth space. Galactic cosmic rays are of concern for human space travel, in particular during the quiet periods called the solar minimum.