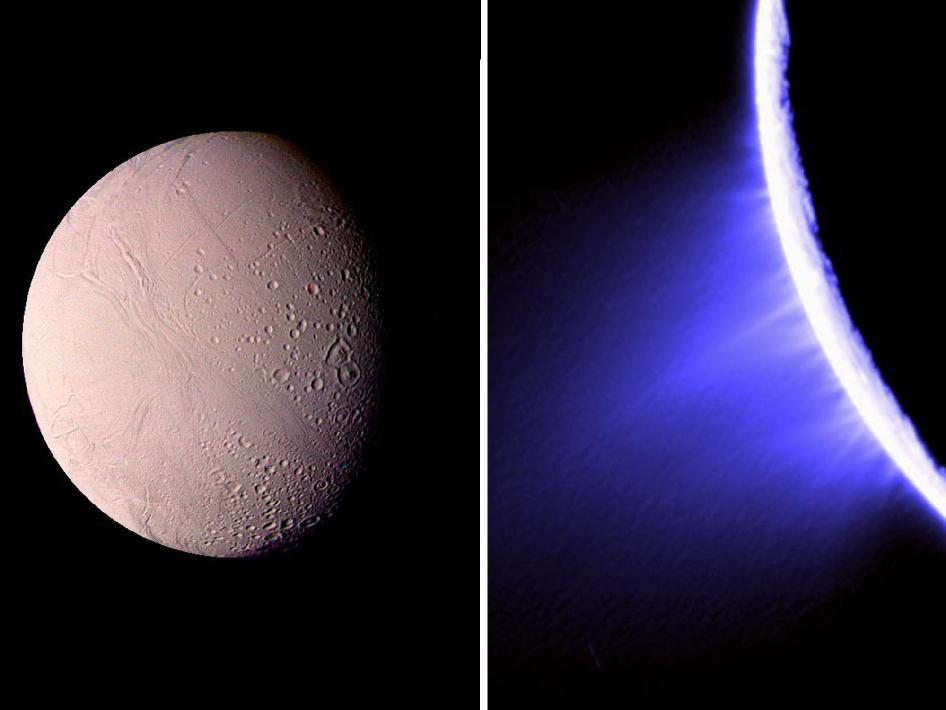 NASA's Voyager spacecraft were the first to take images of Saturn's moon Enceladus close-up in 1980, but it wasn't until NASA's Cassini spacecraft visited the icy moon in 2005 that scientists discovered jets of water vapor and organic particles shooting from the surface.

The mosaic image on the left was made from images obtained by Voyager 2, which flew to within about 87,000 kilometers of the icy moon's surface in 1981. From images like these, scientists learned that Enceladus had half-young, half-old terrain. They inferred that Enceladus must have had some kind of recent geological activity.

Cassini mission planners made sure to include a scan of Enceladus's south polar region, an area that Voyager 2 was not able to image. Magnetic field data from Cassini's magnetometer instrument, followed by heat mapping from the composite infrared spectrometer and images from the visible-light cameras revealed the presence of a plume flaring out of vast fractures on the surface. Scientists then realized that plume material falling back onto the surface and churning ice underneath could continually repave the "young" terrain of Enceladus. A closer view of one of the fractures, nicknamed "tiger stripes," can be seen here: http://www.jpl.nasa.gov/images/cassini/20100816/cassini20100816-c-full.jpg .