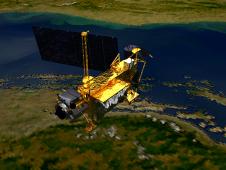 An artist's concept shows UARS in Earth orbit. Credit: NASA NASA's UARS satellite, launched in 1991 from the Space Shuttle, was the first multi-instrumented satellite to observe numerous chemical constituents of the atmosphere with a goal of better understanding atmospheric photochemistry and transport.

Many of these studies centered on the early understanding of ozone photochemistry. The timing of the UARS launch could not have been better. At that time, there were many open questions as to the details surrounding stratospheric ozone loss, especially with the processes related to the Antarctic ozone hole. UARS data were uniquely designed to address those questions.

Also, just before the launch of UARS, the eruption of Mt. Pinatubo occurred in the Philippines, pumping significant amount of sulfuric acid aerosols into the tropical stratosphere. Atmospheric transport spread these aerosols around the global stratosphere over the next year, affecting both the chemistry and the temperature and radiative balance of the atmosphere.

UARS data also marked the beginning of numerous long-term data records for many key chemical species in the atmosphere. These data are now being combined with more recent data sets (especially from NASA's Aura satellite) to better understand how the atmosphere reacts to the policies set down by the Montreal Protocol as well as changes in climate drivers.

UARS also provided key data on the amount of light that comes from the sun at ultraviolet and visible wavelengths. Those data were key for better understanding the radiative balance of the stratosphere and mesosphere and for the photochemistry in those parts of the atmosphere.

› More Detailed Information on UARS' Science Accomplishments
› Back To Top