The Search Coil Magnetometer (SCM) measures low frequency magnetic field fluctuations and waves in three directions (tri-axial) in the Earth’s magnetosphere. Scientists believe that low frequency magnetic fluctuations and waves play an important role in triggering substorms. Frequencies of the waves range from several octaves below the lowest key on the piano (0.1 Hz) up to the top key on the piano (4 kHz). The SCM will measure this range to identify the instability that triggers substorms. Data from the SCM will be especially important in studying the waves in the “current disruption region” about 10 Earth Radii away from Earth in the magnetotail plasma sheet, as well as at larger distances where neutral lines are expected to form. Together with the other instruments of the THEMIS suite, the SCM will reveal the link between waves and the location(s) where substorms begin, thereby identifying the basic substorm mechanism. 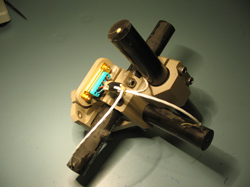 Search coil magnetometers are basically copper coils wound around a high magnetic permeability core. This magnetic core concentrates magnetic field lines - and the magnetic fluctuations they carry - inside the coils. The fluctuations induce currents and electric voltage drops inside the core that can be measured and recorded by the instrument’s electronics circuits.

Several existing spacecraft have already measured the magnetic fluctuations and waves in Earth’s magnetotail. The only other multi-spacecraft mission that carried search coil magnetometers is the Cluster mission. Unlike the Cluster satellites, which are relatively close to one another, the configuration of the THEMIS satellites at distances ranging from 10 to 30 Earth Radii away from Earth will allow scientists to relate wave observations to the location of substorm breakup, as determined by the THEMIS alignments. This way, plasma instabilities important for plasma energization will be placed in the global context, observations made possible by the THEMIS constellation.