How to Explore Something Enormous and Mostly Invisible: Part 1
Scientists on the THEMIS project love a mission that's almost impossible. The challenge they chose to accept: Somewhere in a vast region of space extending half the way to the moon, a tiny trigger initiates the dumping of an avalanche of energy into the aurora. This is called a substorm, a building block of severe space weather that can cripple satellites, disrupt radio communication, and fry power grids. Go find the trigger, and oh, by the way, it's invisible.

Trying to make sense of snapping magnetic fields and surging electrical currents that power substorms is like a game where blindfolded people are presented with an elephant. They are told to guess what kind of animal it is just by touching it. The person with the trunk thinks it’s some kind of snake, another at the side says no, it's too big for that, and the guy with the tail doesn't know what's going on.

Like these contestants, previous missions to explore substorms with one spacecraft just couldn't get the whole picture. That's why THEMIS (Time History of Events and Macroscale Interactions during Substorms) fields a fleet of five spacecraft -- the largest number of scientific satellites ever launched aboard a single rocket.

Space physicists think there are two possible triggers for substorms, but each has a different location. When the five THEMIS probes are in their proper orbits for the mission, they will align over the North American continent along the sun-Earth line every four days for about 15 hours. Scientists will collect coordinated measurements around the two possible locations of the trigger and the subsequent avalanches, allowing them to narrow down the trigger's location. Each THEMIS probe is fitted with a suite of instruments that will detect the action of the invisible substorm effects by measuring electric and magnetic fields, and high-speed electrically charged particles. 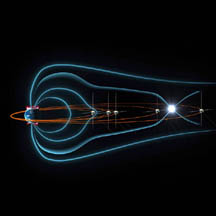 This is an artist's concept of the THEMIS main orbits, represented by red ovals. Blue lines represent the Earth's magnetic field. The white flash represents energy released during substorms. The THEMIS spacecraft will line up at midnight over the United States every four days. The distances range from about half the distance to the moon to about sixth of the distance to the moon. This position will help scientists pinpoint exactly when and where substorms occur. Print-resolution copy Credit: NASA

The probes are packed on top of a Delta II rocket; four side-by-side and the fifth on top. After launch, the top probe deploys first, then the four others three seconds later. This delay was critical to allow enough time for the top probe to clear the way, so the others do not crash into it. "Both the probe carrier and the release mechanism were unique for this mission," said Peter Harvey, THEMIS Project Manager at the University of California, Berkeley. "There was nothing like them in the industry, because we had to fling the probes sideways, not just straight up. And the rocket has to release them safely starting from a rotation speed of 30 miles per hour. Given the few inches of clearance available, this was scary to many reviewers, which meant not just a technical challenge, but a lot of reviews, simulations, and a lot of testing," said Harvey.

Once released, the probes have to be at specific distances from Earth to cover the two possible trigger locations. Different distances make orbits with different cycles; the farthest probe takes four days to complete an orbit. Another probe will be closer, with a two-day orbit. The three other probes will be even closer to Earth, with one-day orbits. "Controlling the THEMIS fleet in orbit is like juggling 5 balls, but with each ball having to pass through its own hoop. Designing such a mission and all the maneuvers to keep the spacecraft in sync and in view of a ground station was not easy," Harvey said.

Stuffing five satellites into one rocket posed another problem. "The probes have had to be small -- all multi-spacecraft missions are like that -- and this means we have to be very careful with the fuel on board. Since the probes had to be small, the solar power arrays had to be small, and this in turn meant that all the electrical systems had to be low power, or switched off most of the time. Generally speaking, we had quite a challenge cramming it all into a very small package," said Harvey.

"But small was not good enough. The five probes are all released by the rocket into a common orbit and need to use fuel to place them far away from each other into their science orbits. There, they need to be kept synchronized with each other, despite the tug from the moon’s gravity, again using fuel -- a lot of fuel. For every two pounds of useful mass we had to carry about one pound of propellant. Our tank volume was limited by the size of the launch vehicle fairing itself. So we went on a diet, and we were counting grams!" said Harvey.

"We didn’t cut any corners on science quality either,” said Vassilis Angelopoulos, THEMIS Principal Investigator, of the University of California, Berkeley. "The entire spacecraft skin had to be electrically conducting, otherwise the static electricity that builds up on an insulator due to sunlight distorts our electric field science measurements. To give you an idea, the maximum allowable exposed insulator surface area on the entire spacecraft skin was the area of a nickel. And this includes the solar panels, which are covered with glass, the blankets, the antenna, everything."

"Moreover, even the tiniest current loops flowing in our power system had to be compensated by an identical reverse circuit. Uncompensated or unmatched loops produce a magnetic distortion that masks the substorm currents in space. The total area of all circuits that were allowed to be unmatched within the entire spacecraft had to be smaller than a quarter. And if you see one of those probes inside, you will see wires snaking all over the place. But that was accomplished as well: The tests at the magnetic facility at NASA’s Jet Propulsion Laboratory have revealed a spacecraft that has exceeded our highest expectations; the total magnetic signal from the spacecraft is a mere one-tenth of what you expect from the substorm signature in space," said Angelopoulos.

Part 2 -– Create a Continent-Spanning Observatory Network on the Ground