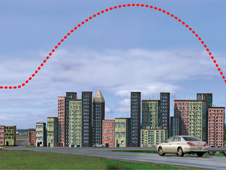 The urban heat island effect can raise temperatures within cities as much as 5 C higher than the surrounding countryside. New data suggests that the effect is more or less pronounced depending on the type of landscape -- forest or desert -- the city replaced. Credit: NASA
› Larger image

Satellite imagery of suburban (top) and urban Atlanta shows the differences in daytime heating, as caused by the urban heat island effect. Credit: NASA Goddard's Scientific Visualization Studio
› Larger image (suburban)
› Larger image (urban) NASA researchers studying urban landscapes have found that the intensity of the "heat island" created by a city depends on the ecosystem it replaced and on the regional climate. Urban areas developed in arid and semi-arid regions show far less heating compared with the surrounding countryside than cities built amid forested and temperate climates.

"The placement and structure of cities -- and what was there before -- really does matter," said Marc Imhoff, biologist and remote sensing specialist at NASA's Goddard Space Flight Center in Greenbelt, Md. "The amount of the heat differential between the city and the surrounding environment depends on how much of the ground is covered by trees and vegetation. Understanding urban heating will be important for building new cities and retrofitting existing ones."

Goddard researchers including Imhoff, Lahouari Bounoua, Ping Zhang, and Robert Wolfe presented their findings on Dec. 16 in San Francisco at the Fall Meeting of the American Geophysical Union.

Scientists first discovered the heat island effect in the 1800s when they observed cities growing warmer than surrounding rural areas, particularly in summer. Urban surfaces of asphalt, concrete, and other materials -- also referred to as "impervious surfaces" -- absorb more solar radiation by day. At night, much of that heat is given up to the urban air, creating a warm bubble over a city that can be as much as 1 to 3°C (2 to 5°F) higher than temperatures in surrounding rural areas.

The impervious surfaces of cities also lead to faster runoff from land, reducing the natural cooling effects of water on the landscape. More importantly, the lack of trees and other vegetation means less evapotranspiration -- the process by which trees "exhale" water. Trees also provide shade, a secondary cooling effect in urban landscapes.

In a quirk of surface heating, the suburban areas around desert cities are actually cooler than both the city center and the outer rural areas because the irrigation of lawns and small farms leads to more moisture in the air from plants that would not naturally grow in the region.

"If you build a city in an area that is naturally forested -- such as Atlanta or Baltimore -- you are making a much deeper alteration of the ecosystem," said Imhoff. "In semi-arid areas with less vegetation -- like Las Vegas or Phoenix -- you are making less of a change in the energy balance of the landscape."

"The open question is: do changes in land cover and urbanization affect global temperatures and climate?" Imhoff added. "Urbanization is perceived as a relatively small effect, and most climate models focus on how the oceans and atmosphere store and balance heat. Urban heat islands are a lot of small, local changes, but do they add up? Studies of the land input are still in early stages."