Global measurements of the carbon stored by plants (net primary productivity) during photosynthesis, based on MODIS data, are an important piece of the climate change puzzle. Credit: NASA Earth Observatory
› Larger image 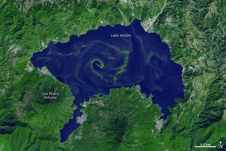 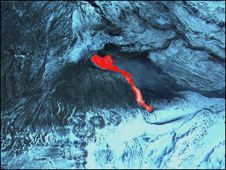 ASTER's ability to sense fine-scale heated surfaces provided a look at a flow from the side of Russian volcano Bezymianny in Kamchatka Dec. 28, 2000. Credit: NASA Earth Observatory
› Larger image 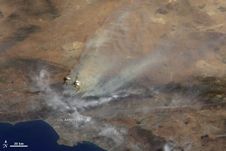 Earth's complex energy budget accounts for how much solar energy reaches the planet's atmosphere and surface, and how much infrared and heat energy escapes back into space. Credit: NASA/ Sally Bensusen
› Larger image

December 18, 2009, marks the tenth year since the launch of Terra, one of NASA's "flagship" Earth observing satellites. But the decade is more than just a mechanical milestone. With each additional day and year that the satellite monitors Earth, scientists achieve a lengthened record of Earth's vital signs. It's that record that helps scientists assess the health of Earth's ocean, land, and atmosphere, and determine how these systems are changing.

"Earth system science is a relatively young science," said Marc Imhoff, project scientist for the mission and a researcher at NASA's Goddard Space Flight Center in Greenbelt, Md. "Terra's sensors have provided the first coordinated set of observations allowing us to link Earth system processes across space and time so we can better understand how they function together and how we interact with them."

Since Terra's five instruments officially saw "first light" on Feb 24, 2000, after a post-launch checkout, the data have continued to advance Earth system science. Here's a sample of the latest developments to be presented by Terra researchers at the Fall Meeting of the American Geophysical Union in San Francisco.

Data from Terra's Moderate Resolution Imaging Spectroradiometer (MODIS) have turned up evidence that climate change may have negative effects for ecosystems earlier than we thought, according to Maosheng Zhao, an ecologist at the University of Montana in Missoula.

For the past several decades, photosynthesis by land plants and trees has absorbed, or acted as a "sink," for about one third of global carbon dioxide emissions, helping to slow the increase of the greenhouse gas in the atmosphere. But scientists have found that global carbon uptake by land plants is declining.

"This decreasing trend has very important implications for how much and how long humans should count on the carbon sink capacity of terrestrial ecosystems," Zhao said.

To arrive at their finding, Zhao and colleagues analyzed MODIS data from 2000 to 2008. Directly measuring carbon dioxide from space is difficult, so scientists rely on sensors to measure the photosynthetic activity of plants. That activity can then be translated to an estimate of how much carbon dioxide the plants are absorbing. "So far, MODIS is the best sensor we have for monitoring global vegetation dynamics," Zhao said.

A closer look reveals that carbon uptake is still on the rise in middle and high latitudes of the northern hemisphere. But that benefit is outweighed by changes in the tropics and southern hemisphere, where scientists observed less carbon being absorbed.

Zhao thinks that a major cause of the decrease is warming-related droughts, which impact crop yields, timber production, and expanses of natural vegetation.

Some computer models have predicted that by the middle of this century, carbon-climate feedbacks could cause terrestrial ecosystems to shift from being carbon sinks to sources, according to Zhao. "Our result is an early warning that we must take some actions to mitigate human-induced climate change."

There's no escaping the risk to human populations posed by natural hazards. But for almost 10 years, Terra has helped governments and local groups respond to and mitigate the consequences.

Just last month in El Salvador, Hurricane Ida brought heavy rains that triggered flooding and deadly mudslides. In another incident in November, a major algal bloom in Guatemala's Lake Atitlan had residents concerned about the lake's health and the safety of people who swim in and drink the water.

To help monitor these hazards, local governments and data processing groups turn to NASA for images from Terra's Advanced Spaceborne Thermal Emission and Reflection Radiometer (ASTER ). The instrument's spatial resolutions of about 15 to 90 meters produce detailed maps of land surface characteristics such as temperature, reflectance and elevation, which are key for helping decision-makers determine where and how to respond.

"The request for the mudslide and algal bloom images are typical of the types of requests we receive," said Michael Abrams, ASTER science team leader at NASA's Jet Propulsion Laboratory in Pasadena, Calif. "We also work with the U.S. Forest Service to image active wildfires for logistical support and often for post-fire damage assessment and mitigation."

Instrument operators can point ASTER -- an instrument provided by Japan's Ministry of Economy Trade and Industry -- at specific targets and acquire about 500 images per day. Each day about 3,000 requests are active in the request database, ranging from field work, global maps, and regional monitoring. To decide where to point the instrument, an algorithm was developed to automatically prioritize requests.

For example, immediate threats such as the requests from El Salvador's Civil Protection Agency to monitor the flooding and mudslides and Guatemala's Ministry of Agriculture to monitor the algal bloom, receive higher priority. Lower priority targets include a project to obtain complete global maps of ASTER imagery at least 3-5 times during mission.

As part of its monitoring of natural hazards, ASTER has been keeping a long-term eye on more than 1,000 active volcanoes around the world. The extended archive will be used by researchers to characterize the historical behavior for each volcano.

"To improve prediction, we need to know which signals are important," Abrams said.

The Station wildfire that burned southern California in late August 2009 was the largest fire in the recorded history of Los Angeles County and its Angeles National Forest, with more than 160,577 acres burned. Pollution created by the wildfire traveled even further. Rising more than 4 miles (7 kilometers) above Earth's surface, smoke from the fire was carried over Nevada, Utah, and Colorado, and carbon monoxide from the fire traveled at least as far as Louisiana.

The measurement of smoke height was possible with Terra's Multiangle Imaging SpectroRadiometer (MISR ), which can resolve atmospheric components -- such as, clouds, dust and smoke plumes -- in three dimensions. MISR can also measure horizontal winds.

Scientists have used the instrument to develop a multi-year "climatology" or statistical database of the heights to which wildfires inject smoke into the atmosphere. The database now contains observations from more than 7,000 smoke plumes in North America, Siberia, and Africa.

"We discovered that for about one-fifth of wildfires, the smoke particles escape the low, turbulent part of the atmosphere and rise to a higher altitude, where they can remain concentrated for long periods and also be transported great distances " said David Diner, MISR principal investigator at JPL.

Researchers studying the dispersal of particulates from wildfires, volcanoes, and dust storms also use the data to test theoretical simulations against observed behavior. These simulations will help researchers understand, for example, what the effect of more fires in a warmer climate might have on air quality.

Other scientists are watching pollution that travels even greater distances, across international boundaries. Measurements of carbon monoxide from the Measurements of Pollution in the Troposphere instrument MOPITT -- provided by the Canadian Space Agency -- and of aerosols from the MISR and MODIS instruments allow scientists to observe both the sources and transport of pollution on a global scale.

"The Terra satellite made it possible to track pollution plumes as they are transported across the ocean, allowing us to observe numerous plumes of Asian pollution transported to the United States," said Daniel Jacob, an atmospheric scientist at Harvard University in Cambridge, Mass. "The findings show that air pollution is a global issue, and thus that meeting air quality goals in the United States will increasingly require international cooperation."

As society considers carbon dioxide caps and geoengineering, open questions remain about exactly how, why, and where Earth is warming. Answering those questions requires a clear picture of how the Earth's energy budget is changing.

For a decade, researchers using the Clouds and the Earth's Radiant Energy System (CERES) experiment on Terra have been taking stock of how much solar energy is absorbed by the planet's atmosphere and surface, and how much infrared and heat energy is emitted back into space. CERES scientists also study how cloud properties influence the energy exchange from space to the atmosphere to the ground and back again.

"CERES has provided a decade of accurate observations that allow us to explore changes over time, to see how radiation at the top of the atmosphere varies seasonally and annually," said Kevin Trenberth, A CERES investigator from the National Center for Atmospheric Research in Boulder, Colo. "The longer the record, the more valuable it becomes."

The observations have shown that the world is cloudier than we thought, and changes in cloudiness can lead to regional and global fluctuations in the heat budget. For instance, albedo is decreasing in the Arctic as snow and sea ice melt, but there is also evidence of compensation from an increase in cloud cover.

Researchers including Norman Loeb of NASA's Langley Research Center, Hampton, Va., and principal investigator for the CERES instrument, have found that measurements of the energy budget from space correlate well with what is being observed by heat content observations in the ocean, where most solar heat retained by Earth is stored.

Most strikingly, the CERES science team has updated the numbers in the planetary budget ledger and found a gap between incoming and outgoing radiation. The Earth is estimated to be absorbing at a rate of about 0.9 Watts per square meter more than it is emitting -- large enough to provoke the question: what does it mean for climate change?

"Terra has allowed us to observe cloud heights with MISR; cloud density and coverage, with MODIS, as well as sea ice, glaciers and surface temperatures; and incoming and outgoing radiation with CERES," said Marc Imhoff, project scientist for Terra. "That's a very powerful combo for understanding how the atmosphere, land, and oceans work together in balancing heat."