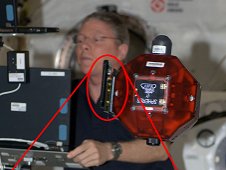 Each volleyball-sized SPHERES has its own onboard power, propulsion, computing and navigational software. Adding the smartphone transforms the satellite into a free-flying robot, or "Smart SPHERES" -- complete with a compact, low-power, low-cost embedded computer and built-in cameras and sensors to enhance and expand robotic operations.

Minor modifications were made to the smartphones, including removing the GSM cellular communications chip to avoid interference with station electronics, and replacing the standard lithium-ion battery with AA alkaline batteries. Otherwise, the smartphone is identical to the off-the-shelf consumer device.

The ongoing experiment demonstrates how the Smart SPHERES can serve as remotely operated assistants for astronauts in space. In coming months, these compact assistants will conduct interior station surveys and inspections, capturing mobile camera images and video. NASA also plans to simulate external free-flight excursions and in time will test whether the robots can handle other, more challenging tasks.

"The tests that we are conducting with Smart SPHERES will help NASA make better use of robots as assistants to and versatile support for human explorers -- in Earth orbit or on long missions to other worlds and new destinations," said Terry Fong, project manager of the Human Exploration Telerobotics project and Director of the Intelligent Robotics Group at NASA's Ames Research Center in Moffett Field, Calif.

The Nexus S phone is a commercial smartphone certified by NASA for use on the space station. Each smartphone is connected to a SPHERES free-flyer via a cable. A wireless network connection (Wi-Fi) to the space station's computers provides the data path to the ground. NASA anticipates using other types of smartphones on the station in the future.