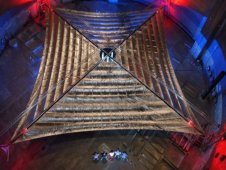 "Let us create vessels and sails adjusted to the heavenly ether, and there will be plenty of people unafraid of the empty wastes."
-- Johannes Kepler, 17th century astronomer

The concept of a huge, ultra-thin sail unfurling in space, using the pressure of sunlight to provide propellant-free transport, hovering and exploration capabilities, may seem like the stuff of science fiction, but a NASA research team developing the Technology Demonstration Mission known as "In-Space Demonstration of a Mission-Capable Solar Sail" intend to prove the viability and value of the technology just a few short years from now.

Led by industry manufacturer L'Garde Inc. of Tustin, Calif., and including participation by the National Oceanic and Atmospheric Administration, the Solar Sail Demonstration mission builds on two successful ground-deployment experiments led by L'Garde in 2005-2006 in a vacuum chamber at the Plum Brook Facility in Sandusky, Ohio, a research laboratory managed by NASA's Glenn Research Center in Cleveland. It also leverages the successful deployment of the NanoSail-D sail, a 100-square-foot test article NASA launched to Earth orbit in early 2011 to validate sail deployment techniques.

During its own test flight, the new Solar Sail Demonstration mission -- dubbed "Sunjammer" by its designers in honor of the 1964 Arthur C. Clarke story of the same name, in which he coined the term "solar sailing" -- will deploy and operate a sail approximately 124 feet on a side. That's almost 13,000 square feet, or a third of an acre -- seven times larger than any solar sail tested in space to date. But when collapsed, it's the size of a dishwasher and weighs just 70 pounds. Attached to a 175-pound disposable support module, the Sunjammer is easily packed into a secondary payload on a rocket bound for low-Earth orbit.

The sail will unfurl in space to catch the sunlight. During the flight experiment, researchers will test attitude controls and assess sail stability and their ability to trim. They also will execute a navigation sequence with mission-capable accuracy.

Once proven, solar sail technology could enable a host of versatile space missions, including flying an advanced space-weather warning system to more quickly and accurately alert satellite operators and utilities on Earth of geomagnetic storms caused by coronal mass ejections from the sun. The technology also could provide an economical solution to removing some of the more than 8,000 pieces of orbital launch debris ringing the planet; conduct station-keeping operations, or hover at high latitudes above Earth for communications and observation; and could drive a variety of propellantless, deep-space exploration and supply ferrying missions.

The project will hold its preliminary design review in 2012. The Solar Sail Demonstration will launch on a Falcon 9 as early as 2014.