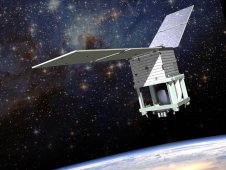 "There are no passengers on spaceship Earth. We are all crew."
-- Marshall McLuhan, 20th-century Canadian philosopher

Efficiency has long been a key driver in our nation's journey to space. We seek hardware, system and power solutions that optimize performance, giving us the greatest value for our investment. But in the 21st century, additional factors help drive our mission of space exploration -- factors closer to home. Now we seek "green" alternatives to the historically efficient but environmentally hazardous propellants that have seen us to this point in our journey. Toxic, corrosive fuels like hydrazine, which have powered a variety of rockets, satellites and other spacecraft over the years, now are being superseded with new solutions -- ones that improve overall efficiency while also promising safer stewardship of the environment. The era of green propellants is upon us: more powerful, burning cleaner and still safely delivering new generations of explorers to destinations across the solar system.

The Green Propellant Infusion Mission (GPIM) project will demonstrate the practical capabilities of AF-M315E, a high-performance green alternative to hydrazine. This innovative, low-toxicity propellant is expected to improve overall vehicle performance. It boasts a higher density than hydrazine, meaning more of it can be stored in containers of the same volume; it delivers a higher specific impulse, or thrust delivered per given quantity of fuel; and it has a lower freezing point, requiring less spacecraft power to maintain its temperature.

While all rocket fuels can be dangerous to handle without the proper safety precautions, AF-M315E is considerably easier and safer to store and handle than hydrazine, and will dramatically reduce costs and permit shorter launch processing times. NASA and its partners will always maintain the strictest safety standards for storage, transport and use of rocket propellants.

The GPIM payload is expected to fly to space aboard the Ball Configurable Platform, a compact small satellite set to be launched in 2015.