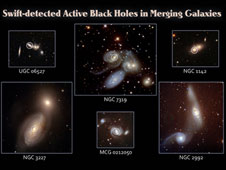 The optical counterparts of many active galactic nuclei (circled) detected by the Swift BAT Hard X-ray Survey clearly show galaxies in the process of merging. These images, taken with the 2.1-meter telescope at Kitt Peak National Observatory in Arizona, show galaxy shapes that are either physically intertwined or distorted by the gravity of nearby neighbors. These AGN were known prior to the Swift survey, but Swift has found dozens of new ones in more distant galaxies. Credit: NASA/Swift/NOAO/Michael Koss and Richard Mushotzky (Univ. of Maryland)
> Larger image
> Unannotated image
> Other Resolutions Click here for multimedia related to the May 26, 2010, NASA briefing on Swift's findings.

Data from an ongoing survey by NASA's Swift satellite have helped astronomers solve a decades-long mystery about why a small percentage of black holes emit vast amounts of energy.

Only about one percent of supermassive black holes exhibit this behavior. The new findings confirm that black holes "light up" when galaxies collide, and the data may offer insight into the future behavior of the black hole in our own Milky Way galaxy. The study will appear in the June 20 issue of The Astrophysical Journal Letters.

The intense emission from galaxy centers, or nuclei, arises near a supermassive black hole containing between a million and a billion times the sun's mass. Giving off as much as 10 billion times the sun's energy, some of these active galactic nuclei (AGN) are the most luminous objects in the universe. They include quasars and blazars.

"Theorists have shown that the violence in galaxy mergers can feed a galaxy's central black hole," said Michael Koss, the study's lead author and a graduate student at the University of Maryland in College Park. "The study elegantly explains how the black holes switched on."

Until Swift's hard X-ray survey, astronomers never could be sure they had counted the majority of the AGN. Thick clouds of dust and gas surround the black hole in an active galaxy, which can block ultraviolet, optical and low-energy, or soft X-ray, light. Infrared radiation from warm dust near the black hole can pass through the material, but it can be confused with emissions from the galaxy's star-forming regions. Hard X-rays can help scientists directly detect the energetic black hole.

Since 2004, the Burst Alert Telescope (BAT) aboard Swift has been mapping the sky using hard X-rays.

"Building up its exposure year after year, the Swift BAT Hard X-ray Survey is the largest, most sensitive and complete census of the sky at these energies," said Neil Gehrels, Swift's principal investigator at NASA's Goddard Space Flight Center in Greenbelt, Md.

The survey, which is sensitive to AGN as far as 650 million light-years away, uncovered dozens of previously unrecognized systems.

"The Swift BAT survey is giving us a very different picture of AGN," Koss said. The team finds that about a quarter of the BAT galaxies are in mergers or close pairs. "Perhaps 60 percent of these galaxies will completely merge in the next billion years. We think we have the 'smoking gun' for merger-triggered AGN that theorists have predicted."

"We've never seen the onset of AGN activity so clearly," said Joel Bregman, an astronomer at the University Michigan, Ann Arbor, who was not involved in the study. "The Swift team must be identifying an early stage of the process with the Hard X-ray Survey."

Swift, launched in November 2004, is managed by Goddard. It was built and is being operated in collaboration with Penn State, the Los Alamos National Laboratory in New Mexico, and General Dynamics in Falls Church, Va.; the University of Leicester and Mullard Space Sciences Laboratory in the United Kingdom; Brera Observatory and the Italian Space Agency in Italy; plus additional partners in Germany and Japan.