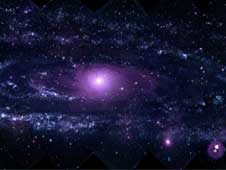 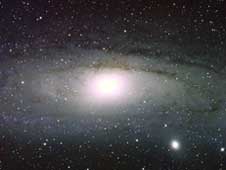 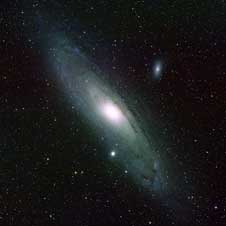 > View larger image
M31 lies 2.5 million light-years away in the constellation Andromeda and is the nearest large spiral galaxy to our own. Under a clear, dark sky, it can be seen as a misty patch with the naked eye. Credit: Bill Schoening, Vanessa Harvey/REU program/NOAO/AURA/NSF In a break from its usual task of searching for distant cosmic explosions, NASA's Swift satellite has acquired the highest-resolution view of a neighboring spiral galaxy ever attained in the ultraviolet. The galaxy, known as M31 in the constellation Andromeda, is the largest and closest spiral galaxy to our own.

"Swift reveals about 20,000 ultraviolet sources in M31, especially hot, young stars and dense star clusters," said Stefan Immler, a research scientist on the Swift team at NASA's Goddard Space Flight Center in Greenbelt, Md. "Of particular importance is that we have covered the galaxy in three ultraviolet filters. That will let us study M31's star-formation processes in much greater detail than previously possible."

M31, also known as the Andromeda Galaxy, is more than 220,000 light-years across and lies 2.5 million light-years away. On a clear, dark night, the galaxy is faintly visible as a misty patch to the naked eye.

The task of assembling the resulting 85 gigabytes of images fell to Erin Grand, an undergraduate student at the University of Maryland at College Park who worked with Immler as an intern this summer. "After ten weeks of processing that immense amount of data, I'm extremely proud of this new view of M31," she said.

Several features are immediately apparent in the new mosaic. The first is the striking difference between the galaxy's central bulge and its spiral arms. "The bulge is smoother and redder because it's full of older and cooler stars," Immler explained. "Very few new stars form here because most of the materials needed to make them have been depleted."

Dense clusters of hot, young, blue stars sparkle beyond the central bulge. As in our own galaxy, M31's disk and spiral arms contain most of the gas and dust needed to produce new generations of stars. Star clusters are especially plentiful in an enormous ring about 150,000 light-years across.

What triggers the unusually intense star formation in Andromeda's "ring of fire"? Previous studies have shown that tides raised by the many small satellite galaxies in orbit around M31 help boost the interactions within gas clouds that result in new stars.

In 1885, an exploding star in M31's central bulge became bright enough to see with the naked eye. This was the first supernova ever recorded in any galaxy beyond our own Milky Way. "We expect an average of about one supernova per century in galaxies like M31," Immler said. "Perhaps we won't have to wait too long for another one."

"Swift is surveying nearby galaxies like M31 so astronomers can better understand star- formation conditions and relate them to conditions in the distant galaxies where we see gamma-ray bursts occurring," said Neil Gehrels, the mission's principal investigator at NASA Goddard. Since Swift's November 2005 launch, the satellite has detected more than 400 gamma-ray bursts -- massive, far-off explosions likely associated with the births of black holes.

Swift is managed by NASA Goddard. It was built and is being operated in collaboration with Pennsylvania State University, the Los Alamos National Laboratory in New Mexico, and General Dynamics of Gilbert, Ariz., in the United States. International collaborators include the University of Leicester and Mullard Space Sciences Laboratory in the United Kingdom, Brera Observatory and the Italian Space Agency in Italy, and additional partners in Germany and Japan.